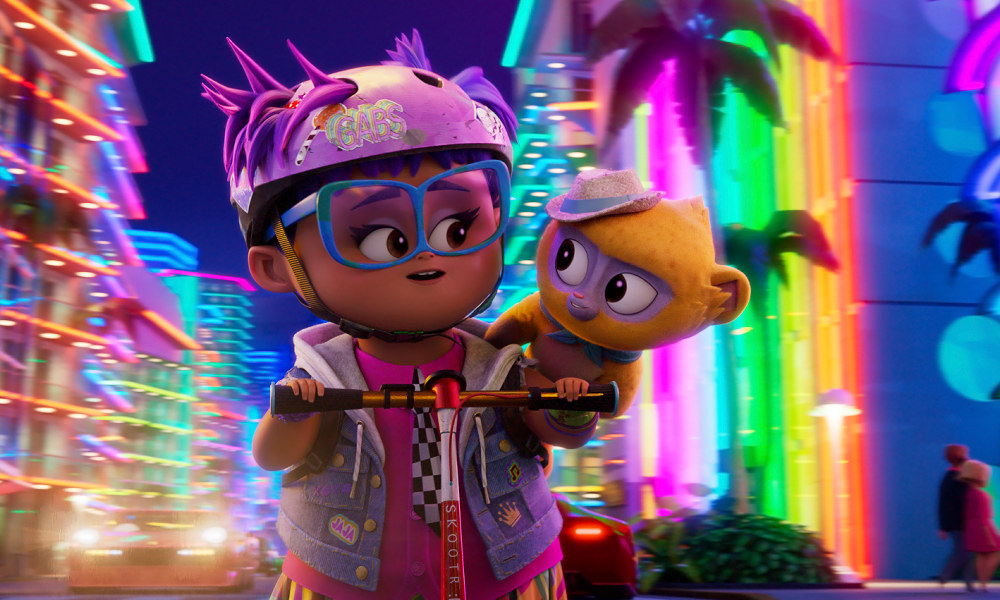 It’s summertime, and few can resist a whirlwind tour of Havana, the Florida Everglades and Miami! The fact that this trip is provided by Sony Pictures Animation’s new musical Vivo, which features music by the award-winning team of Lin-Manuel Miranda and composer Alex Lacamoire (Hamilton, In the Heights) makes the experience even easier to love.

The much-anticipated feature, which premieres on Netflix August 6th and released a new trailer today (read on to watch), is directed by Oscar-nominated animation veteran Kirk DeMicco (The Croods), co-directed by Brandon Jeffords and produced by Lisa Stewart, Michelle Wong and Oscar winner Rich Moore. The script was penned by DeMicco and Pulitzer Prize-winning playwright and lyricist Quiara Alegría Hudes (In the Heights, Water by the Spoonful), with special input from the production’s experts on Cuban culture and the Cuban-American experience. Oscar-winning cinematographer Roger Deakins was the film’s visual consultant.

Vivo follows the adventures of a charming kinkajou (a rainforest “honey bear,” voiced by Miranda), who entertains crowds in a lively Havana square with his beloved owner Andrés (Buena Vista Social Club’s Juan de Marcos). When tragedy strikes, Vivo has to deliver a message to Andrés’ long-lost love Marta (Gloria Estefan) with the aid of an unusual and irrepressible young girl named Gabi (Ynairaly Simo).

DeMicco says he was immediately drawn to the project when he discovered that Miranda was involved. “Lin-Manuel’s optimistic, bright heart is at the center of our movie. We wanted to show an optimistic way of life. What Vivo goes through is painful, but he learns that friends, music and collaboration can help you move forward. I think the big message of the movie is that, with love in your heart, you can learn to move on and find new meaning in your life.” 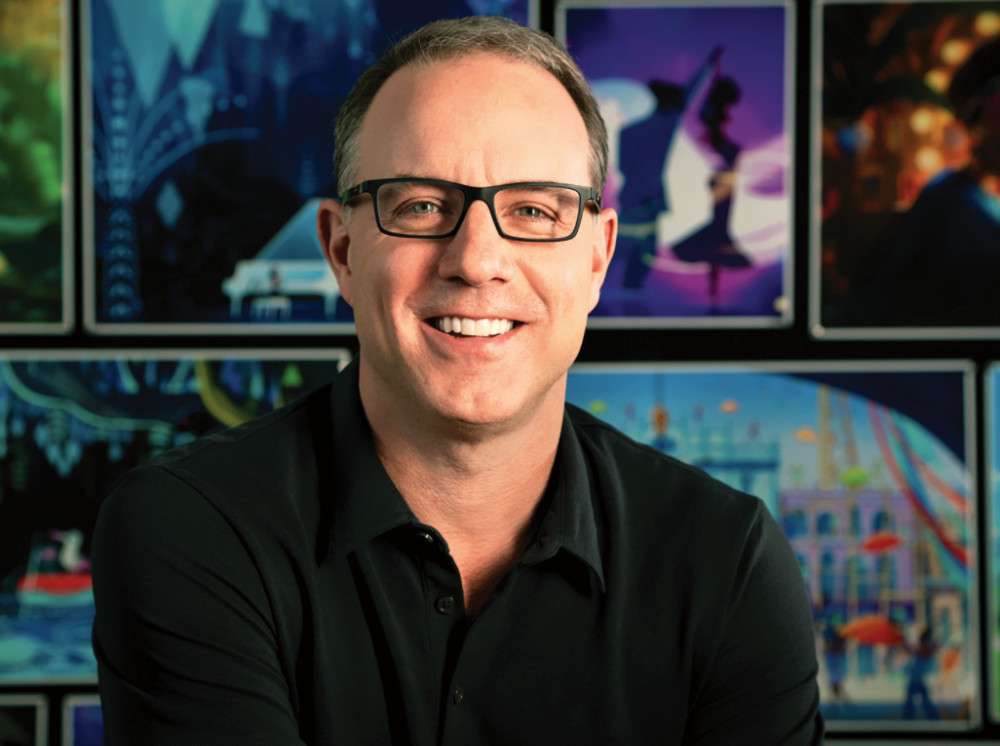 Miranda first came up with the idea for the movie after watching street performers in a New York subway years ago. He recalls, “Vivo came into my life a long time ago, just after I had finished writing In the Heights. So I started writing the songs way back in 2009, and then obviously it got pushed. When we revisited the project with Sony Animation, and with Quiara attached as the screenwriter, we totally rediscovered this journey. The movie has taken so many turns, but at the heart of this story is this incredible friendship between Andrés and Vivo, and how it launches Vivo on an incredible journey from Cuba to Florida, where he does a lot of growing up.”

A Trip to Remember

For DeMicco, the movie offered a chance to work on Sony’s first animated musical and to create a vibrant valentine to some unforgettable locations. “I love the fact that our movie takes us from Cuba to Key West to the Florida Everglades to modern-day Miami. We’ve never had a big CG-animated movie that really explores Caribbean color palettes, from the color of the buildings to the sun and the sky. We were able to capture the elegance of Cuba and follow Vivo and Gabi to the kitschy, fun-loving world of Key West, to the sleek, sophisticated Miami.”

In search of authentic artistry, the director and some key members of his team actually flew down to Havana and some of the film’s settings to get first-hand inspirations for the movie. As production designer Carlos Zaragoza explains, “Our trip to Havana included meeting with local musicians and dancers, architecture experts and people who opened their houses to us. Some aesthetic choices in the movie are based on those specific realities: the why of the colorful patchwork facades of the Old Havana, or how an old palace was subdivided into multiple small apartments. The trip brought a lot of interesting ideas that we incorporated into our project in some way. The goal was to find the essence of Havana — not to copy it, but to create something extraordinary.”

“It was such an eye-opening experience,” recalls co-director Jeffords (head of story on Cloudy with a Chance of Meatballs 2). “To be able to see this amazing country, the warm people, the music and the actual locations we see in the movie was a wonderful experience. You walk up to Plaza Vieja, which is the actual location where we have Andrés and Vivo perform in the movie — it’s not something you get to do with an animation project every day!”

He adds, “One of the great things about Vivo is that it’s a musical that is about music and musicians. Usually musicals are about something else besides music. But one of our central themes is music. The other major theme is that even though you may lose someone that you have loved more than ever in your life, it’s possible to move on and love again. It’s a line we use in the movie, which is: if you get lost, you go and find your own rhythm again.”

According to Zaragoza, the production used two different approaches for each of the musical sequences. “Some of them are anchored in the real world,” he explains. “Those are the emotional highlights of the story when the character goes beyond what’s real and expresses how he or she feels. The second approach is more fantasy-based and they focus on the inner visions of the characters, numbers like ‘Mambo Cabana’ and ‘Gabi’s Song.’ Of course, we’re using specific styles for each musical sequence because it demands it. We are mixing 2D elements in 3D space, and some elements that are made to look like 2D.”

The artistic team also studied a great deal of mid-century travel posters to find the right mix of whimsy and realism. “Those posters offered a really fun, very graphic depiction of Caribbean destinations,” says Zaragoza. “The effects team at Imageworks are also helping us come up with these graphic representations of perspective. We are simplifying shapes and taking out information to make it look more abstract.  For example, a cloud that is more organic and complex in the foreground becomes a simple triangular shape in the background.” 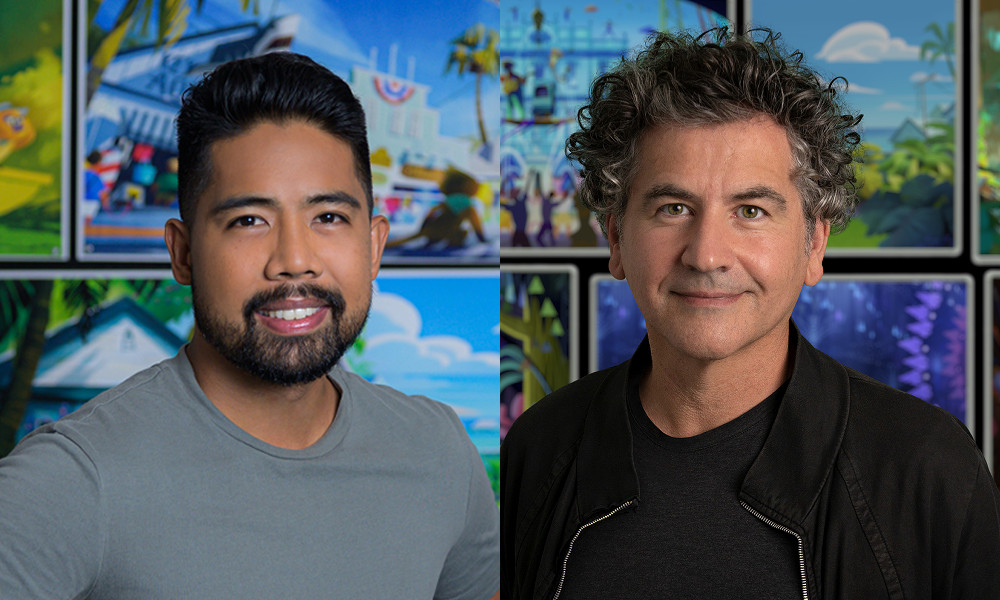 Art director Wendell Dalit, who also worked on visual development for Sony’s Spider-Man: Into the Spider-Verse, is pleased about the film’s patchwork approach to the props and textures. “It all began with the look of Havana, and the fact that many of the buildings are in a state of decay,” explains Dalit. “They are using different layers of paint to repaint their walls, so we tried to incorporate that look in the rest of the world. For example, a plank of wood will have different blocks of color as well, to accentuate that patchwork look. The trees in the Everglades also have slight color variation in the foliage and the branches as well.”

To help distort the backgrounds with a brush stroke technique, a special tool was created at the studio. “This helped give our sets the feeling that they are a hand-painted backdrop like you would see in musical theater,” explains Dalit.  “This really helped give our characters a stage to perform on. You may notice that the details fall off very quickly and things become much more graphic in the distance.”

The artists were also able to incorporate eye-pleasing combinations of 2D and CG animation in musical numbers such as “Mambo Cabana” and “My Own Drum.” As Dalit points out, “For the song sequence where we get to meet Gabi and her world, we were inspired by videogames, music videos, and motion graphics, things that we thought she might be into. You’ll notice our use of 2D graphics. We explored similar approaches in our last two movies Spider-Verse and The Mitchells vs the Machines, so we wanted to continue exploring that idea with Vivo to help create a fun and unique look.”

Art director Andy Harkness (Open Season, Moana) likens the experience of working on the musical numbers to working on several different shorts at once. “It’s really fun for the artists because each one has their own color and design rules,” he says. “Because there is an emphasis on a very graphic approach, they are more about feeling and color, and less about perfection. We are revisiting the musicals of the 1950s and 1960s, titles like Westside Story, to get the approach to lighting and color right. It’s amazing what they were able to do in terms of lighting and color in order to evoke a certain emotion, and we’re following in the same tracks.”

Ready to Take a Bow

DeMicco says he can’t wait until audiences all over the world get to meet Vivo and his unique world. “Summertime is the perfect time to enjoy this world,” he notes. “But beyond the great sounds and sights, Vivo is a movie that has depth. It’s a story of grief and moving on, and has the heart that Lin-Manuel brought to it from the beginning.”

He adds, “I remember how last year, we were all in lockdown and the movie felt like a life raft for many of us. I think it informed everyone’s work. People were working from home, getting up in the middle of the night and animating shots. Everyone was pouring their hearts into it. Just like Andrés, we were all longing for connection, and we were all like Vivo — adrift for a while. But then, little Vivo was the one who could make it happen!”