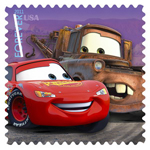 The United States Postal Service is honoring the films of Pixar with a set of postage stamps that will go on sale Aug. 19.

The stamps will be sold in a pane of 20 featuring five different images from Pixar films:

The stamps are a continuation of the USPS’ collaboration with Disney, which resulted in several stamp issuances between 2004 and 2008.