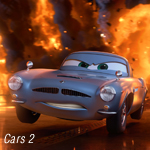 A British screenwriter has filed a lawsuit claiming Pixar stole the idea for Cars from screenplays he shopped around to studios in the early 1990s, and is seeking an injunction to stop the June 24 release of Cars 2, writes The Hollywood Reporter.

The suit was filed by Jake Mandeville-Anthony in U.S. District Court and claims he write a three-part screenplay about real-life car racer Michael Own Perkins and a materials for an animated feature called Cars. Mandeville-Anthony’s materials for his version of Cars included a treatment, sample screenplay, descriptions of 46 animated car characters, 10 character sketches and a marketing and merchandise plan, the Reporter writes.

The copyright infringement and breach of contract complaint says copies of these works were sent to multiple production companies, including Disney and Lucasfilm, and cites numerous similarities between Mandeville-Anthony’s work and Pixar’s 2006 feature Cars, which grossed more than $450 million at the worldwide box office.

The Reporter also writes that the writer and Disney/Pixar have been engaged in a semi-private dispute in the United Kingdom, where a recent judgement in the case is under seal.

Pixar has not commented on the case.