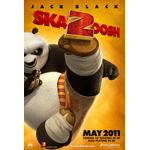 Now that 2011 is fully under way, how about a sneak peak at one of this year’s most anticipated animated feature films, Kung Fu Panda 2?

This TV spot began airing over the New Year’s Day holiday weekend and promise plenty of “awesomeness” for the feature, which DreamWorks Animation is set to release May 26.

The sequel reunites much of the original voice cast, with Jack Black returning to the title role of Po. The film is directed by Jennifer Yuh Nelson and produced by Melissa Cobb.