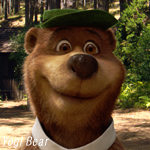 Disney’s Tron: Legacy handily topped the weekend box office charts as expected, though its $43.5 million opening weekend gross leaves unclear whether the film is an unabashed hit, a flop or a contender with legs off to a slow start.

The studio has mounted an extensive campaign for the visual-effects-driven Tron: Legacy, which is being released in stereoscopic 3D and IMAX 3D. The studio is taking a long-term approach to reviving the franchise, which debuted with the 1982 original Tron and has been dormant ever since. So even though its numbers fell short of such sure-fire hits as Harry Potter, Star Trek or Avatar, it’s likely way too early to tell if Tron is here to stay.

The news was far less good for Yogi Bear, another stereoscopic 3D film, this one mixing CG-animated characters from the classic Hanna Barbera cartoon series with live-action actors. Yogi Bear came in second for the weekend with an estimated $16.7 million take. Aimed squarely at the kid crowd, the school-less holiday season holds potential for the film, which garnered some truly scathing reviews, a chance to succeed on its own leve.

Third place went to The Chronicles of Narnia: The Voyage of the Dawn Treader, with an estimated $12.4 million take. After two weekends in release, the film has earned $42 million domestic. But it’s overseas where the film — the third in the series based on the books by C.S. Lewis — has really taken off, pulling in $123 million for a worldwide total of $166 million.

Disney’s animated feature Tangled landed in sixth place with an $8.7 million weekend. So far, the film has earned $127 million domestic and about $97 million overseas for a $224 million total.

Ninth place went to Harry Potter and the Deathly Hallows, Part 1, with a $4.8 million take in its fifth weekend of release. The blockbuster has taken in $265 domestic and $558 million overseas for a whopping $824 million total.