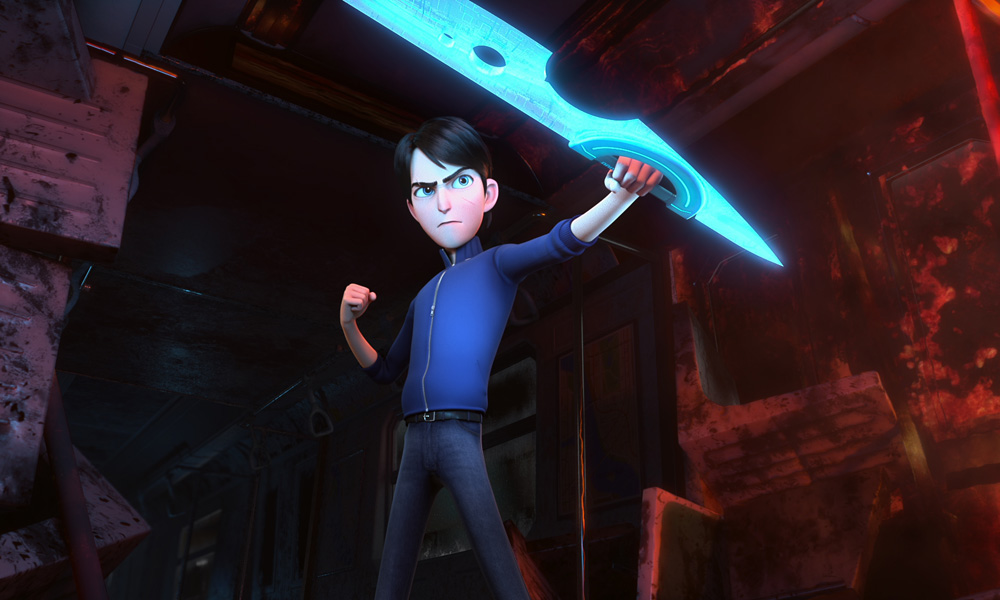 The end is in sight for our favorite trolls, aliens and wizards. That’s right, almost five years (and 53 episodes) after Guillermo del Toro and his talented team introduced us to the Tales of Arcadia saga, the characters from the Emmy-winning trilogy (Trollhunters, 3Below and Wizards) join forces for a deeply satisfying feature-size finale on Netflix this month.

The movie finds Jim and his fellow heroes trying to join forces to prevent Arcane Order leaders Bellroc and Skrael from unleashing dark magic that would destroy humanity. However, since the Amulet of Daylight has been destroyed, Jim has doubts about being a good Trollhunter, while Bellroc and Skrael try to lure Nari back to the Arcane Order for their evil plan to succeed. 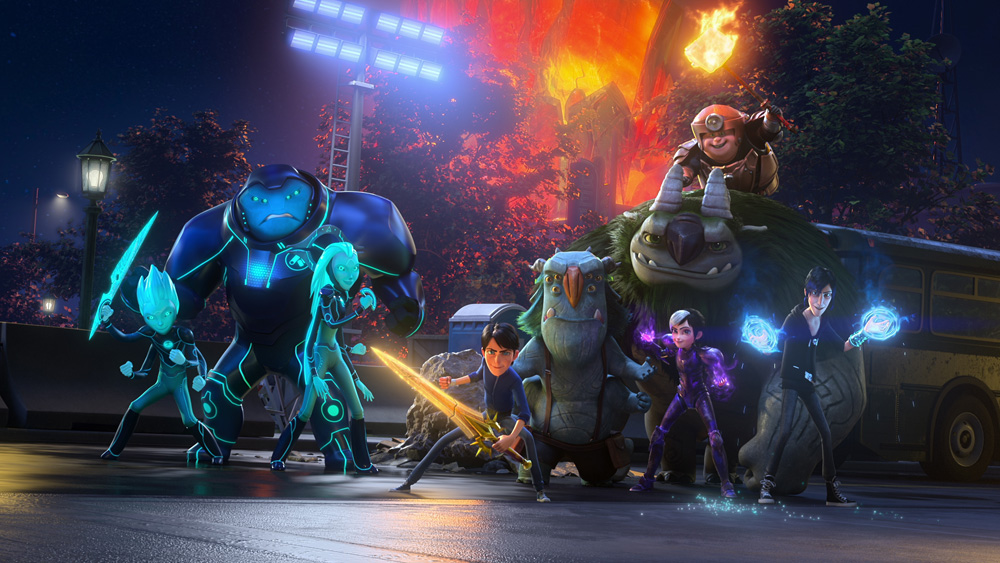 Lots of Characters and Emotions

“We always hoped these three series could culminate with a massive ‘all-stars’ reunion,” says del Toro. “We wanted the feature to improve and expand but to also deliver more scope, more spectacle … more emotion, too. We are very proud of Tales of Arcadia and extremely eager to deliver this spectacular finale.”

“While we were making Trollhunters, those in the know knew we were going to make two more television series from our world of Arcadia,” says Hammes. “As 3Below and Wizards incubated, the Tales of Arcadia was born. Almost from the beginning, I remember Guillermo saying that the studio should allow us to make a movie as the final chapter to the three TV series.”

Schmidt adds, “I had heard discussions about this early on during Trollhunters. Long before I joined the project, the series had originally started as a film, so it only seems fitting that after such a long, epic journey, a feature film would be a fitting capstone.” 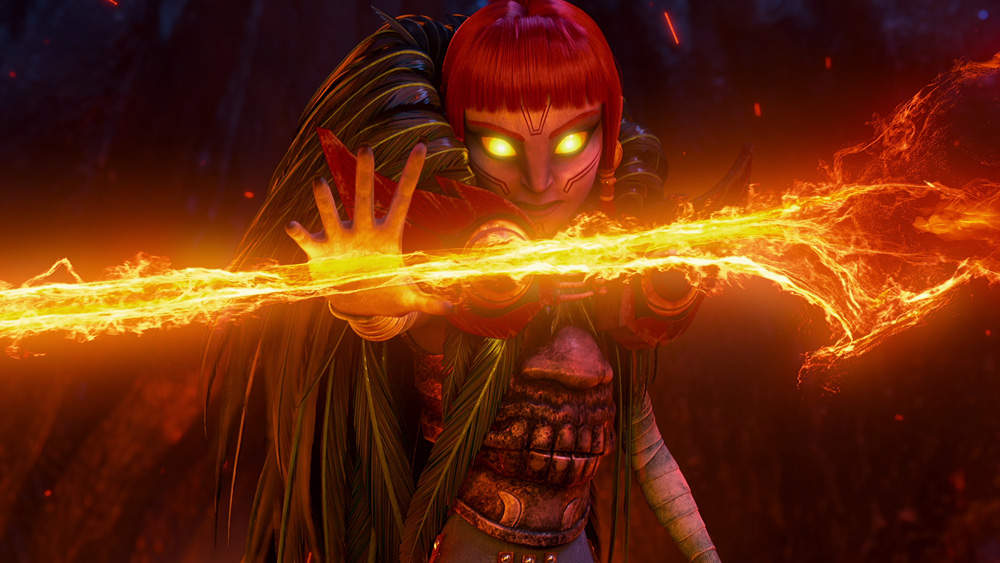 According to the creative team, they all had an idea of where they wanted to finish, but like all journeys, they needed to figure out the exact road to get there. As Ruiz Velasco points out, “There was a lot of writing and brainstorming involved.”

Hammes mentions that it only took a couple of weeks from the first draft to nail the current resolution of the movie. “It was our second attempt,” he says. “Initially, we had something really comical leading to something sad and it didn’t feel like ‘our’ movie. It felt like someone else’s movie.

Hammes says the way the work was divided between the three helmers was pretty straight-forward: “Three directors had the task of handling three acts,” he notes. “Give a whole act to each individual director, but also give each of them enough time in production to talk among themselves so they stay in sync with the common creative vision, captained by Guillermo.”

According to Hammes, before reading the movie script, most everyone thought the quality of the animation was going to be the project’s biggest challenge. He adds, “But the creative leadership thought differently. We knew our vendors were committed to the extreme and that the quality of animation would be there. Once we read the first draft of the script, it was obvious to the creative leadership that the biggest challenge was digesting the massive amounts of visual effects. So, I think my biggest challenge was not to ‘look at the forest,’ but rather stay focused looking at one tree at a time — pacing myself. Don’t think ‘how,’ think ‘when.'” 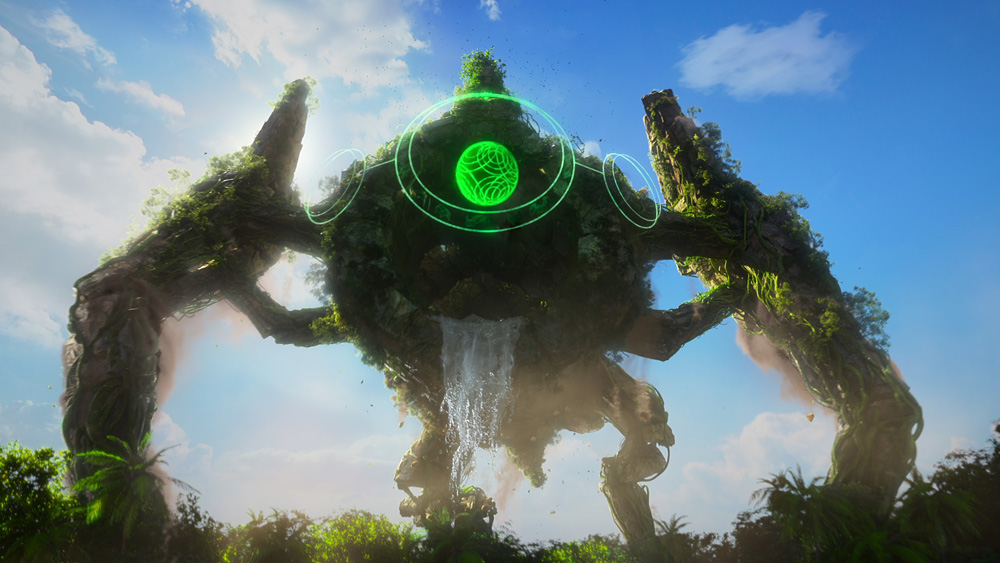 The artistic team’s goal was to keep the visuals and colors coherent with the previous series. As Ruiz Velasco explains, “This movie is an extension of those shows, but at the same time we wanted to push the bar in lighting and use new tools we had for the movie. Alfonso Blaas, our production designer, created a color script for the movie.” Adds Matte, “Giant kudos to the whole art team! The main characters also got an upgrade to their animation rigs.”

Like most other projects produced during the pandemic, the movie faced its share of remote-workspace issues. “Remote communication was a little challenging at the beginning, but we quickly figured out ways to make it work,” says Ruiz Velasco. “We were lucky that we already had all the heavy lifting of the movie done.” 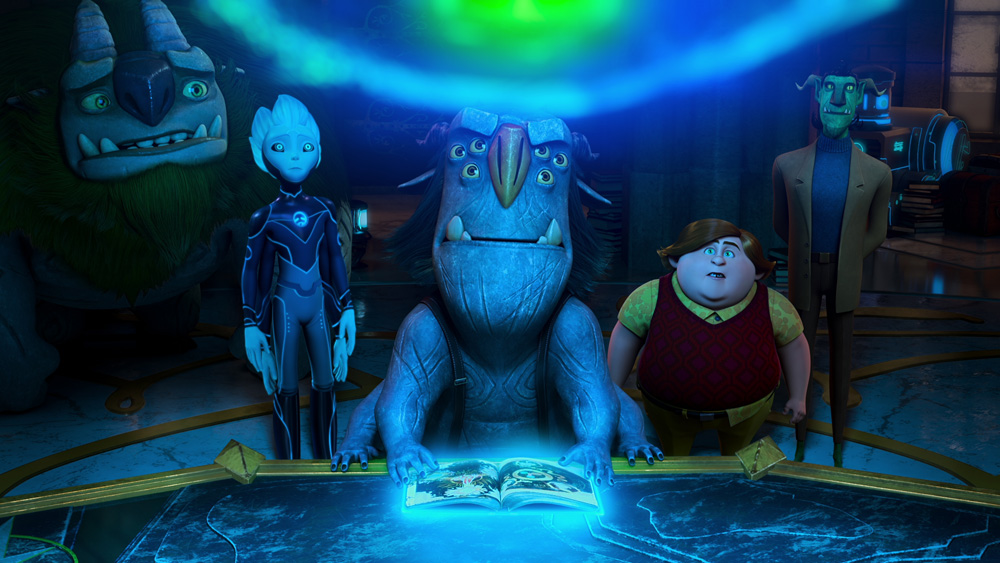 “We were always working remotely to some degree, since a large part of our team is located in different parts of the world,” says Schmidt, referring to 88 Pictures in Mumbai, India,

Original Force in Nanjing, China and CGCG in Taipei, Taiwan, which helped produce the animation. Including the in-house production team, the freelance artists and the overseas vendors, the movie used the talents of over 300 people. He adds, “But the remote work process deprived me of being able to drop into Francisco or Johane’s office for a quick question or work with editorial in person — a personal connection and collaboration that I truly cherished.”

Of course, the filmmakers also had to keep track of the projects’ many colorful and distinct characters. “We tried to fit all the characters from all three Tales of Arcadia shows into the production, but some were lost along the way for logistics and cleaner storytelling,” says Schmidt.

“If you only consider the main characters from Trollhunters, 3Below and Wizards, there are at least 16 characters to track,” says Hammes. “Once you consider secondary characters like Barbara, Strickler, Archie, Coach, etc. the list gets pretty large. It was truly artful how Guillermo Marc, Dan and Kevin were able to keep all these strong characters in-play within the limited time of a movie script.” 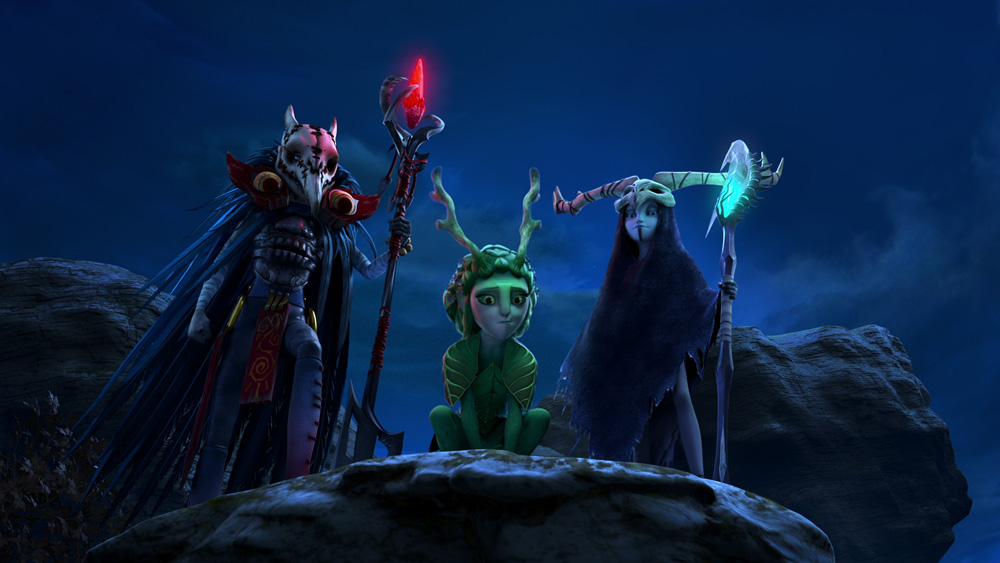 And how did the big boss react when he saw the final version of the movie? Hammes says del Toro called him on the phone and simply said, “Oh, Chad, it’s fantastic! Great job!” Velasco thinks it exceeded del Toro’s expectations. “Seeing it with the final music, audio and image all together after working on a fragmented puzzle for so long is very exciting,” he offers.

After toiling on the finale for so many months, the directors and producers hope both the fans and the casual viewers will enjoy the exciting ride they’ve crafted for them.

“If they haven’t seen the Trollhunters series, I’d like them to take away the desire to tune in and watch it,” says Schmidt. “If they’re already established fans and know the world and characters, then I hope that they find a satisfying closure to the epic adventure.” Ruiz Velasco says he hopes those who haven’t seen all the previous shows will go back to the very beginning after watching the movie. Matte adds, “I hope everyone enjoys the ride!”

Trollhunters: Rise of the Titans premieres globally on Netflix July 21.