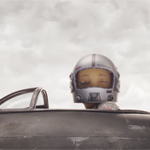 Fans of Fantastic Mr. Fox finally get a first look at indie film icon Wes Anderson’s next animation project, Isle of Dogs. From the man-encroaches-on-pastoral-idyll theme of 2009’s Fox, Isle of Dogs jumps off from the complex and ancient interspecies connection between humans and domestic canines. In true Anderson style, these currents help carry a precocious youngster’s epic adventure, rendered in charmingly scruffy stop-motion.

Set for release through Fox Searchlight on March 23, 2018, Isle of Dogs tells the story of Atari Kobayashi, 12-year old ward to the corrupt Mayor Kobayashi. When an Executive Decree banishes all the canine pets of Megasaki City to a massive garbage dump dubbed Trash Island, Atari crosses the river in a miniature plane to search for his canine companion, Spots, helped along by a newly formed pack of four-legged exiles. Atari’s epic journey will decide the fate of the entire Prefecture.