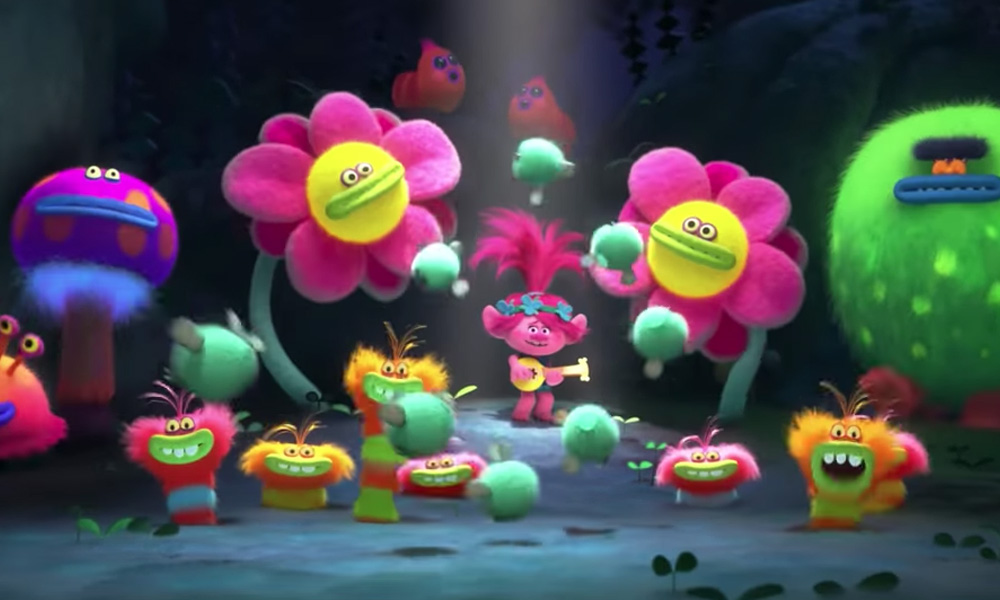 Following the release of a complete set of character posters and full voice cast reveal, we finally got our first look at the expanded musical universe of Trolls World Tour — the sequel to the 2016 hit, coming to theaters April 17, 2020. The spot reunites the beloved characters of the first film and introduces fierce new antagonist Queen Barb of the Rock troll tribe, and the other “six strings” — Funk, Country, Pop and Techno.

Cast as members of the different musical tribes is one the largest, and most acclaimed, groups of musical talent ever assembled for an animated film. From the land of Funk are Mary J. Blige, George Clinton and Anderson .Paak. Representing Country is Kelly Clarkson as Delta Dawn, with Sam Rockwell as Hickory and Flula Borg as Dickory. J Balvin brings Reggaeton, while Ester Dean adds to the Pop tribe. Anthony Ramos brings the beat in Techno and Jamie Dornan covers smooth jazz. World-renowned conductor and violinist Gustavo Dudamel appears as Trollzart and Charlyne Yi as Pennywhistle from the land of Classical. And Kenan Thompson raps as a hip-hop newborn Troll named Tiny Diamond.

Trolls World Tour is directed by Walt Dohrn, who served as co-director on Trolls, and is produced by returning producer Gina Shay. The film is co-directed by David P. Smith and co-produced by Kelly Cooney Cilella, both of whom worked on the first Trolls. Trolls World Tour will also feature original music by Justin Timberlake, who earned an Oscar nomination for his song for 2016’s Trolls, “Can’t Stop the Feeling!,” and a score by Theodore Shapiro (2016’s Ghostbusters, The Devil Wears Prada).

‘Mush-Mush and the Mushables’ Puts the Fun in Fungi
‘The Powerpuff Girls: Monkey Mania’ Launcher Game Breaks Out