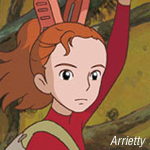 No word yet on when audiences in the United States will get to see Studio Ghibli’s 2010 release Arrietty in theaters, but the movie is coming to the United Kingdom on July 29 and an English-language trailer has been released to promote it.

Take a look at the trailer, courtesy of Empire:

Based on the classic children’s book The Borrowers, by Mary Norton, Arrietty is directed by Hiromasa Yonebayashi from a script by Hayao Miyazaki and Keiko Niwa.

The dubbing voice cast for England will be different than for the eventual American release, likely sometime next year. The U.K. version will feature Saoirse Ronan, Tom Holland, Olivia Colman and Mark Strong.

What do you think, Animag readers? Does this look like another hit for Studio Ghibli?