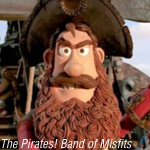 A new trailer has hit for a new stop-motion animated feature from Aardman and Sony titled The Pirates! Band of Misfits.

Aardman, of course, is the studio behind the beloved adventures of Wallace and Gromit, as well as the feature films Chicken Run, Flushed Away and the upcoming Arthur Christmas.

What do you think, Animag readers? Is this a treasure worth seeking out?