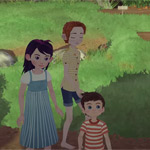 Gertrude Chandler Warner’s beloved adventure books are coming alive on the big screen next month with a special US theatrical event as Shout! Factory Films and Fathom Events present The Boxcar Children: Surprise Island for one day only, May 8 at 4 p.m. local time. Audiences will also be treated to an exclusive introduction by voice star Griffin Gluck (“Henry”), and an explanation on the making of the movie from producer-director Dan Chuba after the film.

“What I like best about the Boxcar Children books and Surprise Island in particular, is how the kids seem to effortlessly appreciate life as it happens,” said Chuba in the announcement. “The vegetables they eat taste better because they tended the garden themselves. They make daily chores more fun by doing them together. They wonder at and explore the nature that surrounds them on the little island, experiencing and sharing their world in a series of small, beautiful moments.”

Based on the second book from the series, the full-length feature has a stellar voice cast lead by Martin Sheen, J.K. Simmons, Griffin Gluck, Joey King and Dane DeHaan. Dan Chuba and Mark Dippé directed the film, which is produced by Legacy Classics at its animation and VFX studios, with co-producers Shout! Factory, Albert Whitman & Company and Blueberry Pictures.