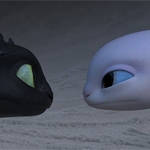 On the heels of first-look image reveals which gave fans a first glimpse at the elusive, pearlescent-white “Light Fury” — a female of Toothless’s near-extinct species — we get to see more of the rare creature in the official trailer for How to Train Your Dragon: The Hidden World. The third feature in DreamWorks Animation’s hit franchise will bring the story of Hiccup, Toothless and their dragon riding cohort to an epic conclusion March 1.

As writer/director Dean DeBlois told The Hollywood Reporter, “We definitely wanted to reference the ‘Forbidden Friendship’ scene from the first film, partly because it is [again] a communion between two characters and also because it goes back to the first installment of the trilogy, and I love giving it a sense of unity. I’m a fan of sequences that can be driven by music and the absence of dialogue … It seemed the perfect setup for a ‘first date’ with the Light Fury. It’s also the kind of sequence we love in animation because it relies on pantomime.”

“The story is another rite of passage,” added DeBlois. “Hiccup is being tested as a rookie chief. He needs to make wise decisions.”

What began as an unlikely friendship between an adolescent Viking and a fearsome Night Fury dragon has become an epic trilogy, and in its thrilling end, Hiccup and Toothless discover their true destinies. As both man and dragon ascend to be leaders of their own kind, beloved characters will have their bonds tested as mythic mysteries and ultimate fates are revealed.

DeBlois returns to bring the culmination of this beloved trilogy to the screen alongside the all-star cast led by Jay Baruchel and America Ferrera. The third offering in the popular trilogy is produced by Bonnie Arnold and Brad Lewis. John Powell is providing the music and Oscar-winner Roger Deakins is back as cinematography consultant. The previous two Dragon features were nominated for Academy Awards. DeBlois will also present a behind-the-scenes peek at the making of the movie next week at the Annecy Festival of Animation in France.

You may also like...
Related Topics:America Ferrera, Dean DeBlois, DreamWorks Animation, How to Train Your Dragon: The Hidden World, Jay Baruchel, The Hollywood Reporter