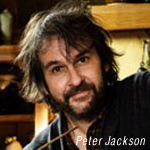 The cinematic return to Middle Earth that is The Hobbit has set both dates and titles for the two-part adaptation.

The first film will be titled The Hobbit: An Unexpected Journey, and will open Dec. 14, 2012. The second part will follow Dec. 13, 2013, under the moniker The Hobbit: There and Back Again.

According to a release from New Line, Warner Bros. and MGM, the films are being shot consecutively in digital 3D at Stone Street Studios in Wellington and on location around New Zealand. Weta will be heading up the visual effects work.

The screenplays for The Hobbit films are by Fran Walsh, Philippa Boyens, Guillermo del Toro and Peter Jackson. Jackson is also producing the films, together with Fran Walsh and Carolynne Cunningham. The executive producers are Ken Kamins and Zane Weiner, with Philippa Boyens serving as co-producer.

The films are, of course, based on the classic fantasy novel by J.R.R. Tolkein.