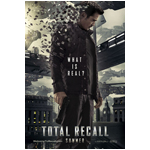 When you think of Philip K. Dick’s seminal sci-fi story We Can Remember It for You Wholesale, it’s hard not to envision Arnold Schwarzenegger and Sharon Stone running around in Total Recall, the 1990 film adaptation of the work by Paul Verhoeven. That’s why Len Wiseman, the helmer of this month’s new version of the film, went straight to the source material and took a completely different approach.

The new movie stars Colin Farrell as a factory worker who slowly begins to realize that he might be a spy after he visits a fake-memory company known as Rekall. One big difference is that the events of this version don’t take place on Mars. They’re set in a far-in-the-future earth, which is dominated by two nation-states—the United Federation of Britain and the impoverished Colony.

Wiseman, who is best known for directing the hugely popular Underworld (2003) and Underworld: Evolution (2006) as well as Live Free or Die Hard (2007), says he was a bit nervous to tackle the assignment in the beginning. 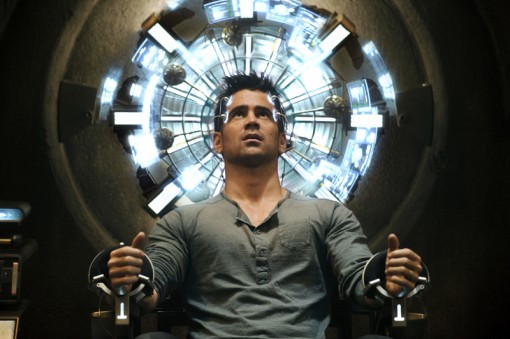 “When the film’s producer Neal Moritz called and said he had this new script that he wanted me to read, I was a bit hesitant because I loved the original movie when I saw it as a teenager,” he says. “But then I realized that this is a very different, more accessible film. This one doesn’t go to Mars, is not a vehicle for Arnold and has a completely different tone. Our main character represents more of an everyman who gets his wish fulfillment to be a superspy.”

The imaginative film’s visual effects were overseen by vfx supervisor Peter Chiang, along with Adrian de Wet and Graham Jack. Visual Effects house Double Negative handled the lion’s share of the 1,600-1,700 vfx shots in the movie, assisted by BUF, The Moving Picture Company and stellar previz work by The Third Floor.

Because Wiseman comes from a classic models and practical effects background (he began his career working in the art department of movies such as Men in Black and Independence Day), his approach was to build as many sets as was practical and then extend them via digital effects. The pic’s vfx highlights span the futuristic many-tiered world of the cities to the hover car chase scene at the center of the movie to The Fall, a giant elevator going through the earth, connecting United Federation of Britain with The Colony. 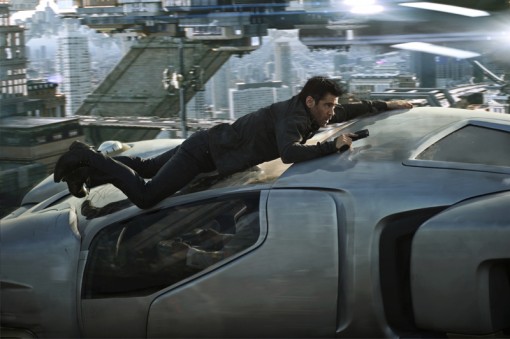 “We try to design visual effects to give them an organic feel—for example, maybe the camera won’t catch the action straight away, and that keeps the effect from feeling too clinical,” says Jack. “One example is during the car chase: there’s a shot of a car being crushed. We originally shot it as a practical effect, but we had to almost completely replace it digitally because we had to make the car look more futuristic.  We were able to base the vfx on the practical effect that was shot, and we got things like the parcel shelf being flung across the back of the car. That’s something we wouldn’t necessarily have thought of if it had all been done in post.”

Wiseman points out that you almost always get a better response when you build practical sets, but because Total Recall requires such a large scale of backgrounds and visuals, it ended up being one of the biggest vfx films the director had worked on.

“The cityscapes are inspired by a mixture of real and digital shots. For example, the big elevator began as a plate that I shot from a helicopter over Toronto. Even your CG is a slave to how the real-life photography is done. We maintained about 20 percent of the buildings that were photographed.” 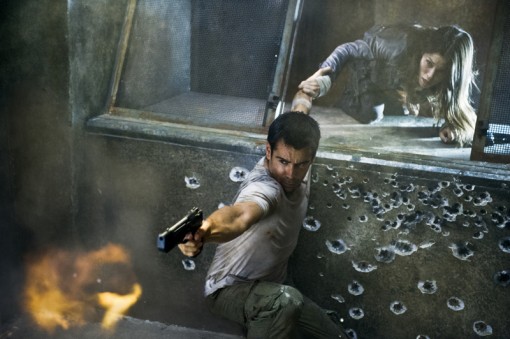 To create the world of the U.F.B. and The Colony, the vfx team began with Patrick Tatopoulos’ evocative artwork.

“When we started on U.F.B., we had very illustrative designs and certain selections on the structures of things, but we went through a whole design process to realize those into a three-dimensional world,” says Chiang. “We looked at photographs of certain neoclassical architecture and design in London. But there was a twist to that neoclassical design in that it needed to reflect the future, so Len added a lot of holograms and glass. So the U.F.B. is a very grand world, with very big concrete plazas, a lot of glass, a lot of fountains, open walkways that then had these freeways threaded in-between that contained the magnetic cars.”

Once the architecture had been designed, the artists used propriety software to help them build an entire city. They created the layouts of buildings and drew from their assets and mixed them up to design the U.F.B. 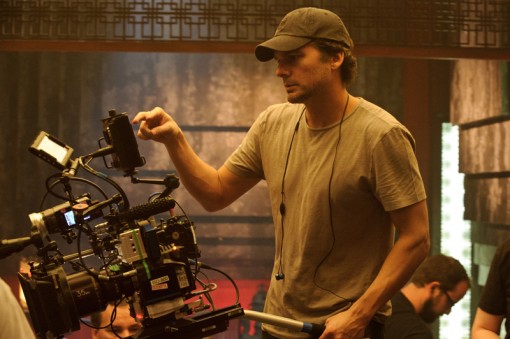 “Instead of having to map out every single building in a view, we would get the gross structure by pulling various 3D points around,” says Chiang. “We’d then assign a randomizer to it that would take the assets from the buildings that Len likes and populate the buildings, that would almost wallpaper the layout to create the numerous buildings.”

Since it would be too labor-intensive to go in and sculpt each individual building  separately, the vfx team drew upon 20 assets that are close-up, 40 that are mid-distance, and used matte paintings for far-off into infinity. Then, they would add in all the fine details—stanchions, elevators, streetlamps, road signs, little barriers that would appear on the side of the road, the detail on the road, the types of tarmac.

“We were really building a city that Len and Patrick had outlaid, from the ground up,” notes Chiang. 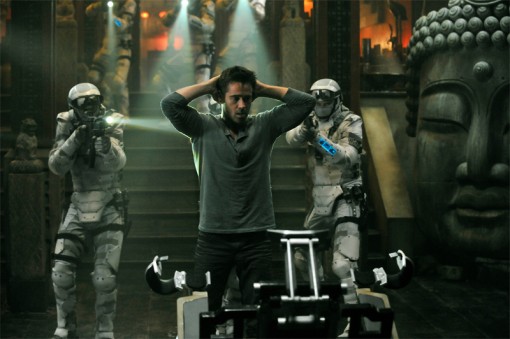 One of the film’s most challenging sequences involved the hover car chase sequence.

“When I saw the pre-viz footage, I was blown away,” says de Wet. “It was so ambitious. It’s done in the daytime, so nothing is hidden in the dark, which I like—I want to see everything; the gritty, grainy realism of an industrialized city. All of the environments were laid out; you could see beautiful aerial shots flying through the layout of the city. It was both amazing to look at and terrifying for me, because that’s what we would have to create.” 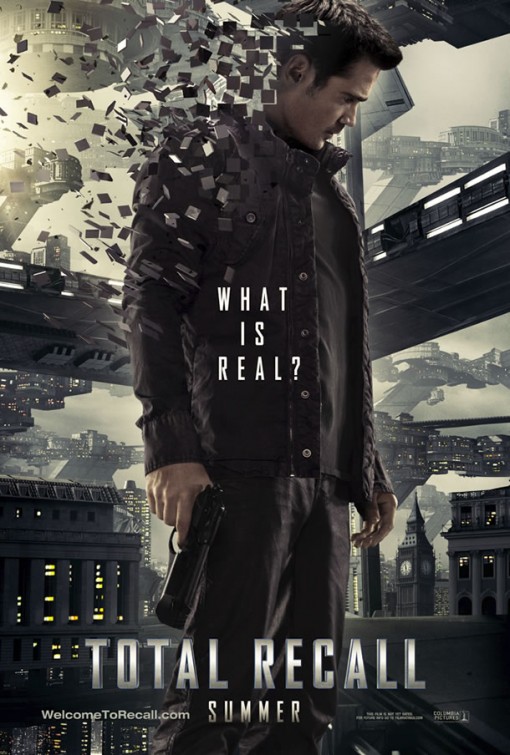 “When many directors create an all-CG shot, they tend to hang on the shot—the vfx is put in and it looks great. But when you’re shooting an action scene, like a car chase, a director usually tries to keep the flow of action going. Len made the whole sequence look real. He’d ask for a blur of background and blend in the action—you’d only see the whole world when the cars were coming toward the camera, and then he’d quickly pan off of it. The backgrounds became secondary to the action—we pulled back so the real-life cars could pop out.”

“Overall, what I’m happiest with is being able to convey the core idea of fantasy versus reality,” says Wiseman, who grew up loving vfx-laden movies like Star Wars, Raiders of the Lost Ark and Terminator. “What drove me to the movie is the mystery of the character itself and whether the whole thing is really happening or not. That’s what I wanted to keep alive more than anything else.” 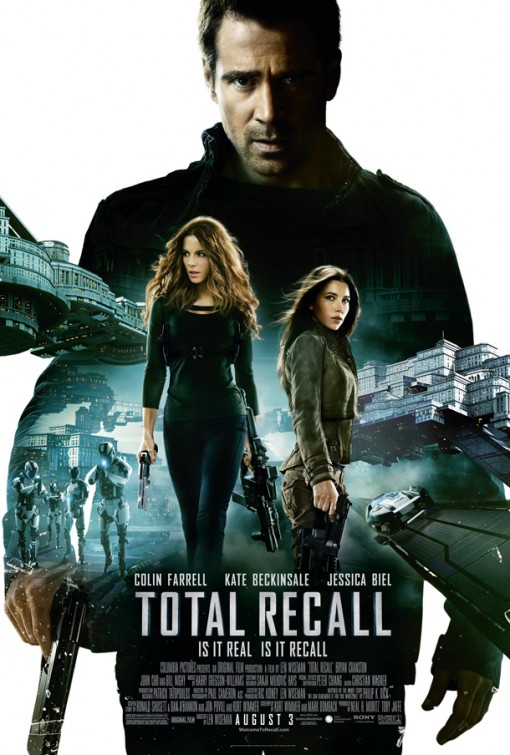