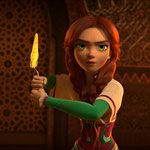 The director of Animagrad’s The Stolen Princess discusses the creative process behind the popular animated fantasy.

One of the big animation success stories this year belongs to Ukrainian animation studio Animagrad (and Film.UA Group), which has had a breakout hit with its CG-animated feature The Stolen Princess. The film, which opened in the Ukraine in March, set a national box-office record in its first weekend ($843,546), and has sold to more than 50 territories so far, including France, Germany, South Africa and Asia.

Directed by Oleg Malamuzh with a script by Yaroslav Voyteshek, The Stolen Princess centers on a wandering actor named Ruslan, who falls in love with Princess Mila of Kyiv and hopes to become a celebrated knight. Mila is not your typical damsel in distress, and she bravely faces all the challenges that fate throws their way after the evil sorcerer Chernomor pulls her through a magical vortex.

Malamuzh recently took the time to answer a few questions about the making of the movie. “I came to the project five years ago after meeting the producer Egor Olesov, while the movie was still in script stage,” he says. “Before that, I had worked in animation for 18 years in French and Ukrainian studios; I also had the experience of creating my small animation studio.”

According to Malamuzh, part of the film’s animation was produced by Animagrad’s own team of animators, while other studios and freelancers also helped out with the production. All in all, about a hundred staffers worked on the movie, but the overall number hit about 300 at some points in the process. “The basic software for our project was Maya,” he adds. “At different stages, we also used additional tools such as Shotgun, Katana and Nuke.”

Malamuzh says one of the most exciting aspects of The Stolen Princess was its diversity. “Though a love story is the main storyline of the film, we are also able to share captivating adventures with the protagonists, introduce original characters to the audience and include several micro-stories in the whole movie,” he notes. “In my opinion, the multifaceted nature of the story enriched our project and will be fascinating for the viewers as well. We think the story is very dynamic, and it won’t let you get bored or distracted. Otherwise, you are sure to miss something.”

The director says two of his biggest challenges were moving from 2D to CG technology and fully exploring the medium’s capacities. He adds, “Another challenge was to increase the quality of the movie as much as we could so that it was competitive enough for the global animation market. Before that, the studio had only produced a rather simple series, and the breakthrough had to be huge. With all things considered, the project budget amounted to about 3.7 million USD.”

Malamuzh has been thrilled to see the audiences’ positive reactions and feedback in Ukraine. “I hope that the viewers all over the world will also give it a warm welcome,” he says. “We have managed to create a very multifaceted story, with jokes and cute characters for the youngest audience; action, fights and chases for teenagers; and heartfelt moments and sophisticated humor for the adults. Each viewer finds something special in this cartoon and sympathizes with different characters, both leads and secondary, getting a positive emotional charge. This allowed us to gain a record number of viewers in our home country and, I hope, the movie will be successful in international distribution as well.”

The director says he and his team were able to achieve most of the goals that they had set for themselves five years ago. “The whole team has grown a lot thanks to this project, and we can present Ukraine at the animation market with dignity,” he adds. “There was a period when we produced a lot of animation commissioned by European clients; there was also a period of this industry’s severe decline in our country, and now we have shown that we are able to produce high-value independent projects.”

Discussing the animation industry in Ukraine, Malamuzh says state support and private investments have done a lot to improve the health of the sector recently. “New studios pop up, experts get trained, and an animation association has been established,” he offers. “Our studio has raised the bar for animation produced by our colleagues in Ukraine. I sincerely hope that after some time, we’ll be recognized at international festivals and markets, we will participate in joint projects with other countries and create our films and series. According to my calculations, the Ukrainian animation industry now has several thousand experts working in it, and this number will only grow.”

A Fan of Pixar and Ghibli

Malamuzh also expresses his fondness for the features produced by Pixar Studios. “I find the stories especially profound,” he says. “I am amazed that the writers and directors never back off in the face of challenging subjects and bravely tell their original stories. I am also still engaged in hand-drawn animation and feel incredibly grateful for the profound works by Hayao Miyazaki and Makoto Shinkai for popularizing Japanese hand-drawn animation in general. I hope that in time, we’ll also be able to create a worthy 2D feature which will be appreciated by audiences around the globe.”

The talented director leaves us with a few words of advice for those who want to have a solid career in animation. “You should obtain a high-quality education and update your knowledge in this field as early as possible,” he says. “Start drawing while still at school: This will help you in the animation industry and provide you with a competitive advantage among colleagues, as we all work in the visual arts. It is also advisable to develop acting skills so that you can quickly identify yourself with your characters and get under their skin, even if they are animals or fantastical creatures. Look closely to see what children around you like and try to understand their interests and hobbies.

“The most important thing to grasp is that animation is a compelling art providing endless opportunities to tell any story; you are only limited by your imagination and skills, and this is something you can develop for your whole life.”