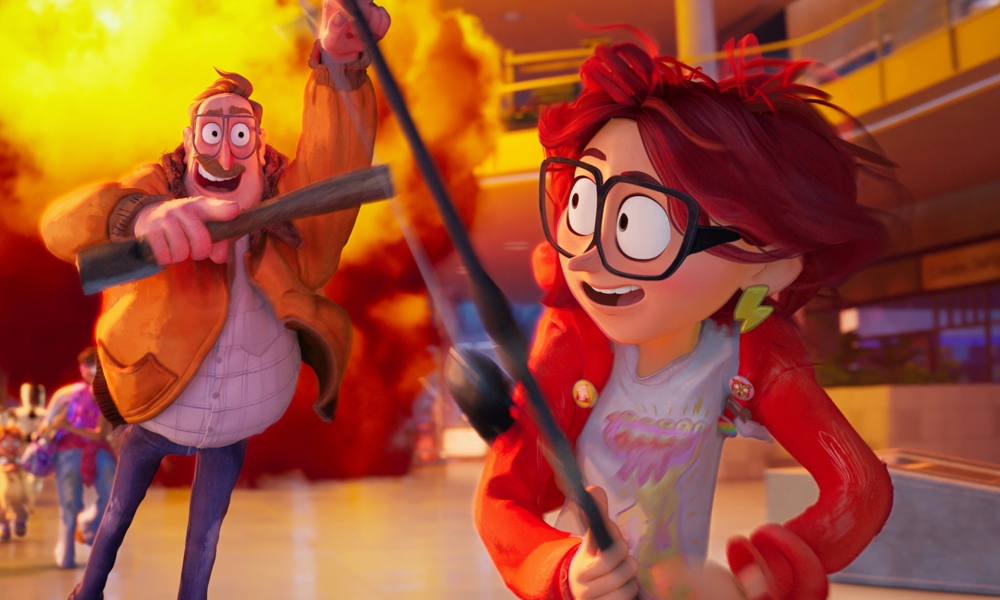 The long awaited latest from Sony Pictures Animation, The Mitchells vs. the Machines is set to make its streaming premiere on Netflix on April 30. Reviews are in for the energetic, pop culture-fueled robocalypse road trip from writer/director Mike Rianda (creative director, Gravity Falls) and writer/co-director Jeff Rowe (Disenchantment, Gravity Falls), and critics are generally charged up about the zany family comedy. The movie currently boasts a 93% on Rotten Tomatoes and a MetaScore of 79 based on 12 reviews.

In the film, a quirky, dysfunctional family’s road trip is upended when they find themselves in the middle of the robot apocalypse and suddenly become humanity’s unlikeliest last hope! When Katie Mitchell (voiced by Abbi Jacobson), a creative outsider, is accepted into the film school of her dreams, her plans to meet “her people” at college are upended when her nature-loving dad Rick (Danny McBride) determines the whole family should drive Katie to school together and bond as a family one last time. Produced by Oscar winners Phil Lord and Chris Miller, and Kurt Albrecht, the pic also stars Maya Rudolph, Beck Bennett, Fred Armisen, Eric André and Oscar winner Olivia Colman.

“What might strike older viewers as ADD filmmaking is in fact an extension of the intricate conceptual care that Rianda and Rowe practiced on Gravity Falls, the one-of-a-kind Disney Channel series on which they collaborated.

The similarities are there in everything from the sense of humor (wherein what first reads as ironic detachment turns out to be grounded in genuine feeling by the end) to the animation style (watch the eyeballs, and how the subtlest adjustment of two tiny black pupils can say so much). It takes real care to make such a superficially silly endeavor resonate with audiences, and this talented team pours attention into everything from the overall look — which grafts the retro charms of hand-drawn cel animation onto a rich 3D-rendered world — to the nifty trick of seeding details that pay off in the third act as if they were throwaway gags throughout.”

“I wish the film’s laughs were as consistent as its energy, giving its able voice cast better material, and that there had been more distinctive story beats like the unexpected hints that Katie is gay. Ultimately, this is an original adventure that feels stitched together out of a hundred familiar film plots, often freely acknowledging its pop-cultural plundering, as in the family’s obligatory slo-mo power strut away from a building exploding in flames. But for audiences content with rapid-fire juvenilia, the busy patchwork of prefab elements will be entertaining enough.”

“The frantic, anything-goes nature of their films, both in tone and visuals, belies a tight focus on storytelling and dialogue with sight gags and set pieces used to supplement rather than distract. Kids are forcefully taken along for the ride but the sharp, often sitcom-esque humor ensures that parents are equally enthralled and here, once again with writer-director Mike Rianda and co-writer Jeff Rowe deserving the credit, the balance is pitched just right.

…It’s also genuinely funny, a credit not only to the hit-a-minute script but also to a finely picked cast of comic actors … If it all gets a bit too overstuffed at times and if some of the father-daughter emotional sap doesn’t evoke quite the reaction intended (Pixar still lead the way on that front), there’s more than enough here to outweigh the not-so-great.”

“Given the film’s commentary on our over-reliance on technology, one may expect Rick’s anti-tech stance to play a role in mending his family’s rifts. But Rianda and Rowe present this aspect evenhandedly, as an inevitable part of a generational divide, neither chiding Katie for her abundant use of technology in her art and only lightly mocking Rick for being so out of touch with the times. Indeed, Katie eventually learns why Rick gave up on his dream of living in the house he built in the mountains, and his reasons for worrying so much about her future as an artist thanks to technology. While The Mitchells vs. the Machines certainly lays out the dangers of technology run amok, it also sees its power to connect people, with different outlooks and from different generations, in meaningful, even healing, ways.”

Read all about the making of the film in Animation Magazine‘s feature story here.