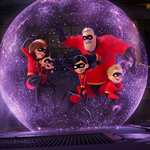 As acclaimed director Brad Bird returned to the Incredibles characters he helped bring to the screen 14 years ago, he faced one key question: Would he or wouldn’t he make them older for the sequel, which opens this month in theaters? After all, some of the kids who watched the first film could be in college now.

“I thought about aging everybody up and then I thought, ‘No, that sucks,’” says Bird, who was keen on maintaining the relationship dynamics of the first film. “I realized that I’m not very interested in the powers they have. I’m interested in the family. Men are always expected to be super strong, so the dad has super strength. Moms are always pulled in a million different directions, so I had her be elastic. Teenagers are defensive, so I had Violet have force fields and invisibility. Ten-year-olds are energy balls, so they can’t be stopped. Babies are unknown, so maybe they have no powers and maybe they have all the powers — so that’s what Jack-Jack was. He was seemingly the normal one. That idea changes if you age the characters up: Those periods in your life and those particular perspectives disappear if you age them. I’m not interested in a college-age Jack-Jack!”

With this firm grasp on who he wanted his characters to be in Incredibles 2, Bird still faced some inevitable changes. Bud Luckey, who was the voice of Super Relocation Program agent Rick Dicker, died in February, so they would have to recast the role he had defined. A fan of Breaking Bad, Bird quickly thought of Jonathan Banks, who played Mike Ehrmantraut in the series, for the part.

“It just adds an edge,” says Bird of Banks’ vocal performance. “It makes you feel like [Rick Dicker] has seen some s—. It’s not alien to the character. It just adds another dimension. And I think animators really love having these new layers to work with on the movie.”

Bird also brought on Bob Odenkirk, another Breaking Bad alum and star of Better Call Saul, for the role of big time telecom executive Winston Deavor — the kind of smooth talker we’ve seen Odenkirk bring to life in past work. Bird loved the comedy and timing that Odenkirk brought to the role.

With such a notable cast, a group of seasoned animators and newer processing power that allowed the creative team to pull off some of their most ambitious action sequences yet, it was a quieter scene that stands out as one of the director’s favorites. There’s a moment when Bob and Helen Parr are alone in bed discussing who will go out in the world and take on work and which spouse will stay at home with the kids. Things become intense, but it’s not thing kind of tension you’d expect. There are no explosions — just two people mostly talking quiet enough so they don’t wake their kids.

“I just enjoy the scene where the husband and wife are in bed and arguing because it’s so real, these two, because they both want to be complete and there’s no way to be complete at every moment,” says Bird. “Animators are like actors that way. They want to dig deep like that so there’s often a lot of competition for scenes like this where there’s a lot of great acting, and you’d probably think animators always want the scenes where you’ve got planes and car chases and everything else.”

In the 14 years since Bird created The Incredibles, there have also been huge boosts in rendering power and overall computing power. Pixar has also developed many proprietary software packages that have enabled some of the most ambitious moments in animation. And it’s a good thing, too, because Bird wanted to choreograph some epic action sequences.

“This movie is a much bigger-scale movie, and the lighting is more complicated — in a good way, because it’s more painterly. But it’s not just about the tools. We have a crew that’s more experienced … They’re stronger than they were on the last movie.”

“When we did the first movie, the technology was barely there,” says Bird. “There were some things we had to let go of because we couldn’t quite do them, and the lighting was not quite there, either. This movie is a much bigger scale movie and the lighting is more complicated —  in a good way, because it’s more painterly. But it’s not just about the tools. We have a crew that’s more experienced, people who worked on the first film and have been learning their craft in the time since we did the last film. They’re stronger than they were on the last movie. We also have a good mix of newbies who were kids when the first film came out and now they’re here and working on the next Incredibles, so we have a good mix of people who can use the tools in ways that really push the art form.”

Bird was keen on choreographing the kinds of big action sequences he loved seeing when he was growing up. It’s a way to show his characters using their powers and reveal sides of them we haven’t seen in the previous movie. The director acknowledges that he’s always tinkering with action sequences like one in which Helen/Elastigirl tries to stop a runaway train by adding elements that make the action clearer and subtracting things to make the pace of the action move in the right way. But it wasn’t enough to just show off the powers of his characters.

“I like it when heroes are clever,” says Bird. “You know, Indiana Jones has no super powers other than persistence and doggedness. He’s always being dealt a bad hand or being punched or dragged behind a car, but he has to figure out a way around that. So, Helen stretching doesn’t solve all her problems. She has to be clever in how she uses it. And you can see her in sequence thinking and see that when she needs to find the fastest way to get somewhere she thinks about it and she might jump into the wind and become a sail. She’s not just a superhero. She’s a smart superhero.”

Bird also wanted to return to his ideas about family, which have their roots in both his childhood and the family he and his wife created together.

“There’s something about the strength of the family bond,” says Bird. “I like to think that at their best, families have each other’s backs, and I’ve been somewhat surprised how primal that is. And that’s in everybody, I think. Both of my families — the one I grew up in and the one I have with my wife — are rowdy at the dinner table, and tempers might flare because you disagree with someone but it was never personal. I have three older sisters and I’m used to the drama. It’s not a big deal for a door to get slammed after a big proclamation. I definitely have insight on how to be an annoying kid brother.”

Disney releases Pixar’s The Incredibles 2 in theaters on June 15.

You may also like...
Related Topics:Brad Bird, Pixar, The Incredibles 2