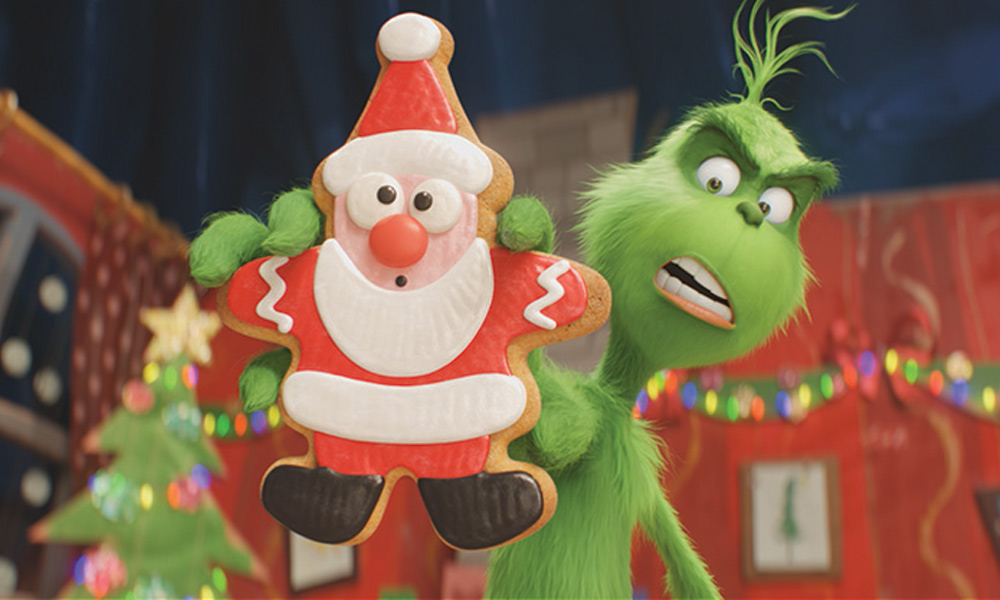 The new CG-animated feature The Grinch digs deeper into the world of the favorite holiday curmudgeon.

Anyone who has shared Thanksgiving dinner with extended family probably knows how grueling it can be to spend an hour or two with a miserable grouch. With that in mind, Illumination Entertainment and Universal Pictures are offering a more sympathetic holiday meanie in The Grinch, the first feature-length animated version of the classic 1957 Dr. Seuss book How the Grinch Stole Christmas.

“Watching 90 minutes of a really grumpy guy had the potential to be a bit of a downer,” notes the film’s art director Colin Stimpson, a sentiment that he says was borne out by early test screenings. “We focused on making the Grinch likeable, and that’s a tricky thing. It’s a balance between his being grumpy but not so miserable he turns you off.” 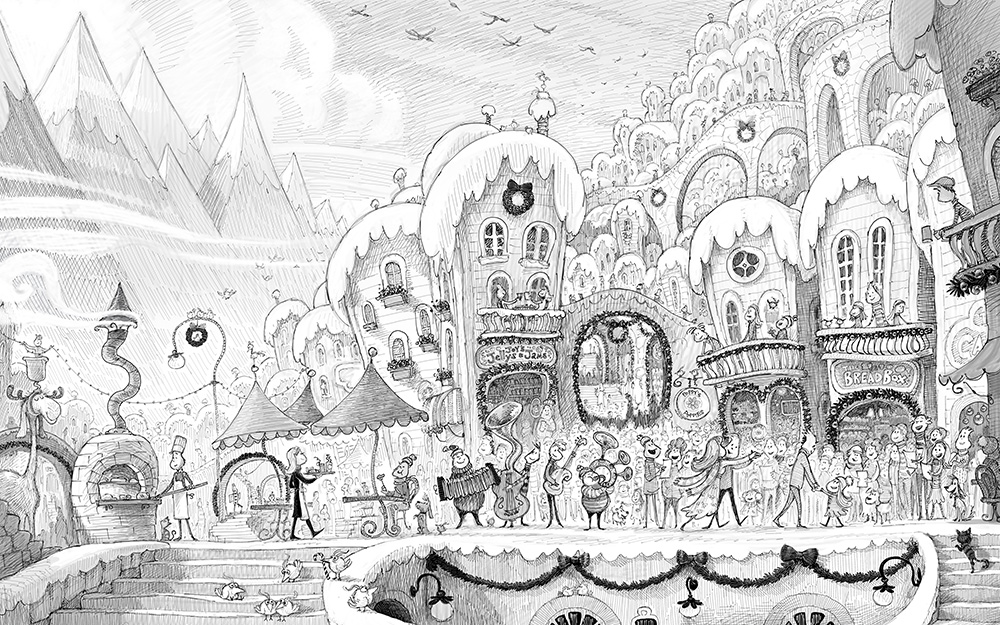 Even though he’s still green, this is a Grinch of a different color. “We really tried to not do an amalgam of Grinches that people have seen over the years and instead go back to the source,” says co-director Yarrow Cheney. “We wanted to stay true to that story but dig into who the Grinch is, what Whoville is, where this place is, what kind of people live there, and why the Grinch hates Christmas so much.”

Co-director Scott Mosier elaborates: “Christmas represents something to the Grinch that brings him pain and sadness. It’s the joy and togetherness and warmth and beauty of Christmas that he’s never been able to be a part of.” In the book, the source of the character’s misanthropy is simply dismissed by saying, “No one quite knows the reason,” which wasn’t enough for the filmmakers. “We portray part of his past but without the definitive ‘Yes-we-absolutely-one-hundred-percent-know-the-reason,’” Mosier says. “We wanted to explore this visually as opposed to jamming in a very narrated piece of back story, and we tried to integrate it while respecting the original material.” 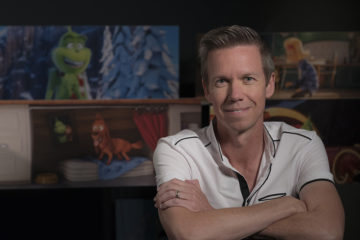 We wanted to stay true to that story but dig into who the Grinch is, what Whoville is, where this place is, what kind of people live there, and why the Grinch hates Christmas so much.”

Fleshing out everyone’s favorite holiday-hating hermit — who here is voiced by the ubiquitous Benedict Cumberbatch — was only one of the challenges. There was also the necessary matter of expanding a 1,350-word kids’ book into a full-length movie. This included creating a few key characters not found in the original, such as Bricklebaum, the Grinch’s terminally cheerful neighbor who lives one peak over from the peak of Mount Crumpit (voiced by SNL’s Kenan Thompson); Cindy Lou Who’s widowed mom (Rashida Jones); and the Mayor of Whoville (Angela Lansbury).

The character of Cindy Lou, who is voiced by 11-year-old Cameron Seeley, has also been built up and given an entire subplot. “She is this ball of energy who represents innocent joy,” Cheney says. “We expanded her role so that she could be a much bigger counterpoint to the Grinch’s world view. She has a plan for Christmas Eve, too — they’re at cross-purposes, and they’re going to collide on Christmas Eve.” Cindy Lou’s goal is to force some face time with Santa himself in order to thank him, a plan that is obviously complicated by the Grinch’s scheme.

Care was also taken to humanize the Who characters, whose looks between the book, the classic 1966 Chuck Jones television version, and the 2000 live-action adaptation, ranged from insectoid to rodential. “The characters in the beginning were much wackier and broader, but I don’t think they were as appealing,” Cheney notes. “We didn’t want to put off the people who had not seen Seuss before, and we didn’t want to distract from the story by having characters that were too strange and weird.” Not so weird, perhaps, but still a stiff task for the animation team at Illumination Mac Guff in Paris, France. 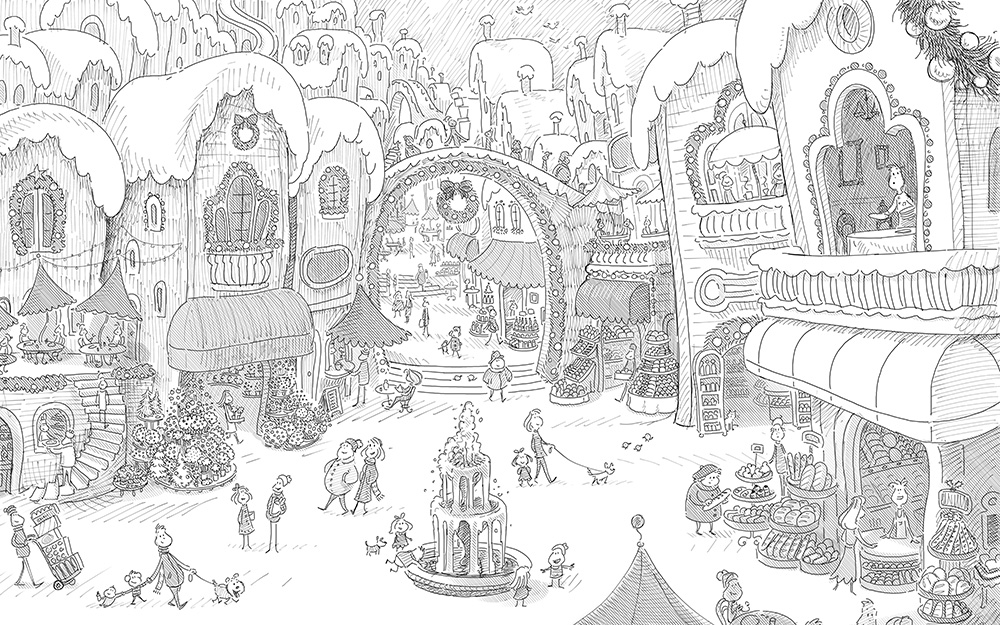 “Cindy Lou was pretty hard because we went for the tomboy attitude, but she has to be cute at the same time,” says Pierre Leduc, who served as animation director on The Grinch, along with Christophe Delisle. “She has to step up to the Grinch, so we gave her an attitude, but not too much, otherwise she would be too defiant.”

The relationship between the Grinch and his faithful dog Max, who serves as his sounding board, was also a primary area for development and elaboration. Early on, the decision was made to keep Max a real dog, not a talking anthropomorphic hybrid. “At first we went for real dog behavior,” Leduc notes. “But we changed him a bit because we realized the comedy potential of the character, and gave him some human expressions. You see that Max loves the Grinch, so an audience could think that, if this dog loves him, he might not be so bad.”

Leduc goes on to describe the team’s approach to the Grinch’s character as angry-blasé. “Most of the time we have a little bit of anger in his expression, even if it’s mixed with something else. We also tried to make him different from Gru, from Despicable Me, because they are pretty related.” Maya, along with some proprietary tools, was used for the animation.

Not all of the Grinch’s expository dialogue, however, is a one-sided conversation with Max. The filmmakers also used the technique of narration when necessary, relying on a mixture of lines from the original book as well as new material. “Where we needed to convey an interior thought from the Grinch, we used the narration, and anything we added was always in the spirit of the book,” says Mosier. Illumination was also able to lure composer Danny Elfman for the project, which Mosier considers “a huge coup for the movie, since he’s so great at creating a score that’s almost a character.”

Meanwhile, the recreation of Whoville forced the digital artists to check their straightedges at the door. “When you study Dr. Seuss, you realize nothing is symmetrical,” says Stimpson. “That’s a very tricky thing to do, especially with CG, when the computers and people working with them want to make everything perfect. Every time we spoke to someone it was, ‘Bend that line here, don’t make them parallel, no 90 degree angles.’ Every square inch of the picture frame was designed, nothing was automated.”

Adds Cheney: “In the book, Whoville was just a couple of houses, but we made it full of little shops and houses and wonderful people. Then, you threw in everything that goes along with Christmas: the lights, the food, all the things that conjure up these wonderful feelings. That gave us the warmth and appeal that we needed for this place, but it also gave the Grinch a much bigger task. If he was going to steal Christmas from anywhere on Earth, this was almost the worst-case scenario. That made the actual execution of it seem like an impossible task, and it gave us a lot of places for invention.”

“When you study Dr. Seuss, you realize nothing is symmetrical. That’s a very tricky thing to do, especially with CG, when the computers and people working with them want to make everything perfect.”

It is during the heist, as Cheney describes the comedic set-piece, that the audience begins to see the Grinch’s slow attitudinal transform. “He has fun doing it, and in the service of destroying Christmas you see him softening and starting to enjoy the things that we love about holidays,” he says. “You start to see him start to get excited and become more social during the work that it takes to pull off this big huge heist that he’s thrown himself into, and then you watch the euphoria the Grinch feels as he’s stealing Christmas.”

And, of course, there is snow, since it wouldn’t be a holiday movie otherwise. “One of the biggest challenges was to cover the world with snow,” Cheney states. “It has to be stylized, like in the book, but it also has to look real. The animation studio did an amazing job with the snow, integrating this really naturalistic snow so that it reacts differently depending on the different kinds of snow it needs to be.”

The Grinch is Illumination’s second foray into the world of Dr. Seuss, following the hugely successful 2012 feature version of The Lorax. Will Seuss purists and general audiences alike be satisfied this time around? While Stimpson allows that “maybe the ardent Seuss fans will have a few queries with what we’ve done, though maybe they won’t,” the filmmakers have a far wider viewership in mind. “We definitely chose this path because it would hopefully appeal to a wider audience, people in Europe and China who are not familiar with the original story,” Stimson says.

Adds Leduc: “We tried to appeal to the biggest audience we can, to make everybody happy.”

Universal/Illumination’s The Grinch begins his war against the holidays on November 9.