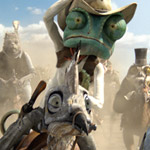 Many directors have described Johnny Depp as a versatile actor who has been able to portray a nice variety of roles throughout his career. But Gore Verbinski, who has directed Depp in the three Pirates of the Caribbean movies, thought he would be really adept at playing a lizard!

“Rango is a story about a character who is uncomfortable in his own skin and who really wants to be loved,” says Verbinski during a recent phone interview. “We had this idea about having this character in a Western story populated with creatures of the desert. All along, I had Johnny in mind for the lead role and I brought it up to him when we were filming Pirates 2. It was our understanding that he would be playing the lead, who is a chameleon.”

Verbinski fleshed out the script with John Logan (Gladiator, The Aviator, Sinbad: Legend of the Seven Seas) and Pirates storyboard artist and writer James Byrkit about three and a half years ago. Also on board were children’s book author David Shannon and producer John Carls, who helped shape the project with the director. 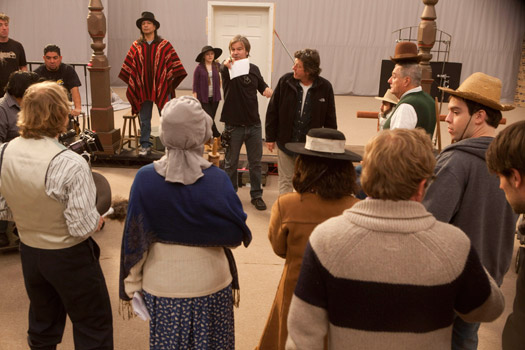 “It took us about 16 months—there were seven artists working in my house,” recalls Verbinski. “We didn’t have studio permission or anything. We conceived the characters, storyboarded every frame on a Mac and did all the voices as an animatic—that was the first half of the project.”

Depp loved the rough story reel, and once he was able to clear 20 days in his schedule to record, the other voice actors were tapped for the movie. “It was very important for me to have all the cast be together in one room over this 20-day period,” notes Verbinski. “We recorded the dialog as if we were doing live action. The boom man was very happy because he got to be in every shot!”

Industrial Light & Magic’s visual effects rock star Hal Hickel remembers visiting Verbinski’s house in La Canada, Calif. in January of 2008. “My colleague John Knoll and I were pitched this story and we were both very excited because it didn’t feel like any of the other animated movies we had seen,” says Hickel. “Of course, there had been animated projects such as Fievel Goes West and Home on the Range, but we didn’t think there was anything that even remotely felt like Rango.”

Hickel says the film’s main chameleon is a cross between Hunter S. Thompson, Don Knotts and Johnny Depp. “Gore has a terrific sense of humor and we had worked with him on the three Pirates movies, so we knew the film would be different from the other animated projects we’d seen lately.”

The veteran animation supervisor, who has worked on features as wide-ranging as Toy Story, Star Wars: Episode I and II and Iron Man, says one of the factors that sets this movie apart is the tactile quality of the animation. “These days, the term photo-real gets thrown around a lot, so we stopped using that, but there’s a photographic quality about this movie—you can really imagine touching it,” he notes. “The film is highly stylized—you won’t mistake these characters as human, but everything else is very real … the costumes have sweat drops on them, there are loose threads, you know exactly what they would smell like.”

According to Hickel, it was the unique vision of character designer Mark “Crash” McCreery (Edward Scissorhands, Jurassic Park, Pirates series) that guided the look of the movie. “Crash is the sole visual god on this film,” he points out. “If you don’t have a vigorous unifying vision like his, you can end up having a visual mess. This may be a Western town, but it’s made up of castaway human objects—picnic baskets, oil cans … there is a lot of keen attention to detail.”

Because Rango is ILM’s first original CG-animated feature, the vfx powerhouse had to introduce a new process that would accommodate the open-ended requirements of the project. “There were some new proprietary tools written for the movie, but the roll of the layout department was what was very different here,” notes Hickel. “In our other assignments, we take a live-action plate and match the camera moves, animate the CG characters and put them in a live-action movie. Here we had to take the 2D drawings in a story reel and put them in a 3-D camera. We had to set up procedures, checks and pipelines to make that work, all of which dovetailed into the enormous amount of asset management because everything in the frame—every rock, every plant—is created by us. That was all new for us.”

Hickel also emphasizes that in vfx, the artists work shot by shot, while in an animated feature of this magnitude, there is a lot of shared work. “Working in a sequence mode was also very important,” he notes. “So we wrote up new tools for our lighters, so they can work step by step on an entire sequence level, and then go and make the individual shots.”

The new set of challenges was also what made the animators at ILM quite excited about the project. “Our bread and butter tends to be more action-driven material, explosions, etc. There’s not a lot of acting-based jobs,” says Hickel. “We love that work, but we were also chomping at the bit because this job was all about acting all day. You don’t realize how hard it is going to be when you have a scene that is so open-ended. You don’t have this firm framework like you would in live-action films. It’s very exciting, but it’s also quite challenging.”

Verbinski echoes this thought. “Nothing happens by accident in animation,” he says. “In live action, we are constantly patching things together. In animation, you don’t have moments of accidental chaos. Every particle of sand, every yawn or twitch of the eye has to be discussed, considered and debated. That’s why we had a high level of spontaneity during our recording sessions with the actors. I think any animator wants room to advance. In their inner souls, they all want to do the famous dream sequence from Dumbo.”

The Good, the Bad and Sergio Leone

Obviously, the movie reflects the magnificent spaghetti westerns of Sergio Leone, but Verbinski has managed to pay homage to some of his other favorite artists and writers as well. “Visually, we were hoping to capture the arid quality of the desert. There’s even a Chinatown subplot in the movie. Everything had to be dry, dusty and hot. There’s also a certain spirituality to the landscapes. Although it seems that nothing lives there, it’s full of life if you are willing to look deep. It evokes [Peruvian author] Carlos Castaneda’s spiritual connection to the cactus.”

When asked about his influences in the animation world, Verbinski says he has a huge amount of admiration for the works of the Brothers Quay and Jan Svankmajer. “I think his Alice is absolutely unbelievable,” he adds. “In the past 15 years, the works of Miyazaki have been pivotal. I love his movies because his work is not homogenized in any way. He tells the stories he wants to do, the way he wants to tell them.”

It’s interesting to see how Verbinksi is completely inspired and invigorated by the possibilities of animation after conquering the box office with his live-action fantasies. “For me, it’s a fallacy to think of animation as a genre because it’s just a technique to tell the story,” he points out. “I would love to see a resurgence of more adventurous PG-13, R-rated types of animated features, the kind of stuff Ralph Bakshi used to do. Rango has a certain subversive spirituality in its scenery, its sound and its emotions. It’s wonderful to see kids watch it and be slightly hypnotized by the dreamscapes of the movie.”