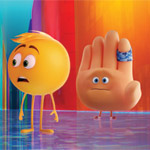 Emojis are smiling, frowning and grimacing at us from every corner of our plugged-in planet. Once a faddish part of tween texting, they’ve jumped off our phones and into pop culture in a way that says they’ve gone beyond a trend. Why, sometimes people over 25 even send them in their texts now.

Sony Pictures Animation’s The Emoji Movie – written as a story about an emoji named Gene (T.J. Miller) who feels he’s defective because he makes more than just the “meh” face he’s supposed to make – could not have better timing. Getting this movie made from pitch to theater in only two years took some serious focus and a new set of tools to render everything in time for its release in late July.

Producer Michelle Raimo Kouyate believes it was their highly focused story pitch to Sony that sent them into production so quickly. When Sony decided it wanted to make the movie, they also knew they wanted it out in two years since the subject was part of a zeitgeist moment in teen culture.

The emojis live in a place called Textopolis on the phone of a teenage boy who’s desperately trying to say the right thing to a girl via text. Meanwhile, the emojis themselves run into a crisis when one of their own can’t seem to show the right face. This “meh” emoji begins a journey to “fix” himself and find the code that can restore him to an emoji who only makes one face.

“It’s a ‘Rudolph’ story in a way, it’s that outcast story,” says director Tony Leondis. “Me being a gay kid growing up, I felt that way. You feel different and alone and then you realize everyone feels that way and thinks something about them is broken.”

Though the emojis themselves are iconic in the 2D space of a text message, giving them the kind of depth and roundness that turns them into movie stars made for complex design and tech challenges. Roughly 280 characters live in Textopolis, each one of them with their own unique look that had never been translated to film.

“We couldn’t make them look like humans with a giant Styrofoam ball for a head,” says Leondis. “They needed to have arms and legs and move so we did a lot of tests so they didn’t look like the Jack in the Box guy.”

Visual-effects supervisor Dave Smith lead a team spread out between Vancouver and Los Angeles to make believable, relatable characters using tools like WireCore to cut rigging processing time from 15 to 35 days down to one to two days. He also used a new shading system in Arnold – a powerful Monte Carlo ray tracing renderer originally developed with Sony Pictures Imageworks – to give the characters depth and meet the intense deadlines on the project.

Carlos Zaragoza, production designer for the project, worked to develop environments that were visually interesting and fresh while also familiar to the audience. Along with the rest of the team, he had to stay close to the original vision of the film in order to keep the movie on track

Roughly 600 artists – ranging from specialists who came onto the film for specific tasks to those who were part of the entire production – contributed to the film. The bulk of the animators were in Vancouver while most of the core design team was in Los Angeles.

The filmmakers also worked out how to visualize the abstract worlds of Facebook, Instagram, Spotify, Dropbox, and other apps for the project. Each becomes a place with more “content” than we might expect from what we see on our phones.

“Developing the apps was the most fun, developing the visualization of a concept,” says Leondis. “Spotify streaming music just evokes so many metaphors, and the idea of streams of music and the characters being on those streams just came right away.”

There are also visual references to classic films like Casablanca, Life of Pi and 2001: A Space Odyssey that Leondis thinks will work for both younger and older audiences.

“There’s no reason to dumb down a film for kids,” says Leondis. “The grownups will get it and the kids – if they don’t get it now, they will later, and maybe they’ll ask about it and want to see the films.”

Planet of the Apps

With so many apps out there, the film is careful to focus on just a few, rather than get lost amongst them as many of us do on our phones each and every day. Leondis, Kouyate and the other filmmakers selected the apps for their story potential. Each one helps the characters grow or take another step on their journey. Gene finds out being expressive – being able to make more than just the one face he’s supposed to show – makes him a natural in the Just Dance app.

In addition to all the pop cultural touchstones, the film boasts impressive voice talent. Hi-5 is played by James Corden, Maya Rudolph voices Smiler, Anna Faris is Jailbreak, Sofia Vergara is the voice of Flamenca and Sir Patrick Stewart is the Poop emoji.

“The idea was how do we do Poop without doing the obvious,” says Kouyate. “If we didn’t have it in the movie it would be like there was something missing because it’s a very popular emoji. So we wanted an upper crust voice and when we went out to Sir Patrick Stewart he got the joke immediately.”

For Leondis, who initially wanted to be a Greek Orthodox priest but left to follow a path in animation, the ultimate goal was to make a movie about more than characters who each had just one face to share with an audience.

“I grew up on animated films that were about something, there was something to say,” says Leondis. “This movie is about upsetting the status quo when you find out you’re more or different than you expected and finding out that’s okay, and that it’s even great.”

Karen Idelson lives and works in the South Bay. She’ll text you later.