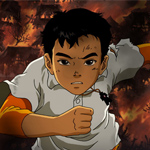 If you’re trying to check all the possible Best Animated Feature contenders off your list and find yourself in the Los Angeles area, here’s your chance to catch the ambitious Chinese effort The Dreams of Jinsha, which opens in Beverly Hills today.

The film, which is billed as the most expensive animated feature ever produced in China, follows the fantastical adventures of a modern-day middle school student, Xiao Long, who is transported 3,000 years back in time to the ancient kingdom of Jinsha. It is a beautiful, magical world but is plagued by a mysterious evil energy, and Xiao Long pledges to help the people of Jinsha defeat it. When he discovers he has a special connection to the natural world, he gains the trust of Princess Hau’er and her subjects who fight alongside him to expel the evil from their kingdom.

Directed by Chen Deming and produced by Hangzhou C&L Digital Production, Jinsha will be presented with English subtitles at Laemmle’s Music Hall at 9036 Wilshire Boulevard in Beverly Hills. For showtimes and to view a trailer, visit www.laemmle.com.

You may also like...
Related Topics:L.A., The Dreams of Jinsha