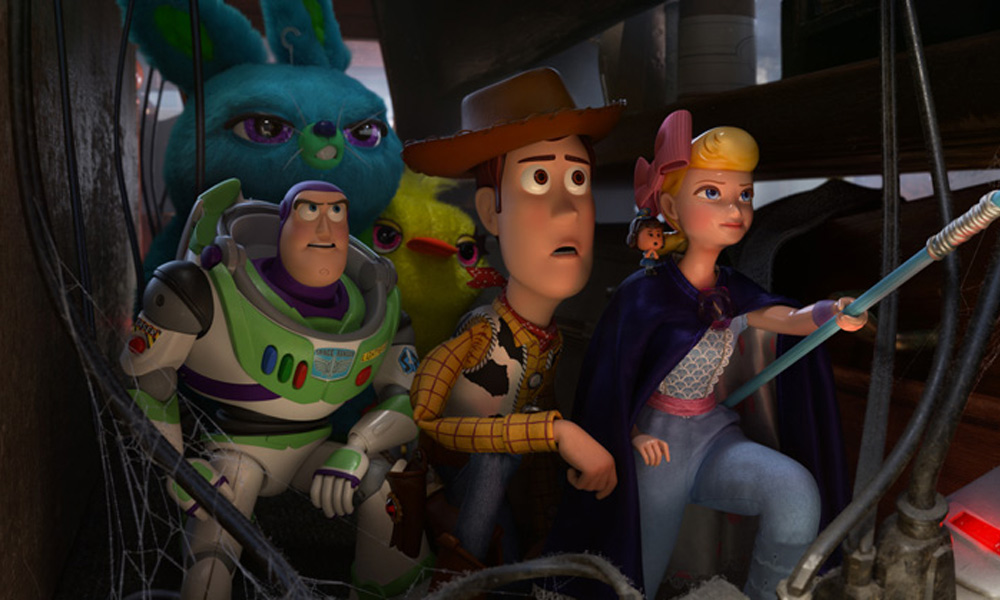 In the last three Toy Story films, audiences have followed Woody, Buzz and their fellow adventurers through the great outdoors, frightening daycare centers and even to Pizza Planet. Still, there’s one place the story hasn’t gone — at least, until Toy Story 4 is released in June — and that’s into the unfulfilled love story between Little Bo Peep and Sheriff Woody.

The filmmakers knew this storyline would be one worth exploring and that Bo Peep would be a surprising character to rediscover. She was always resourceful, clever and mostly in control of all her interactions with Woody. And all of these things made her the kind of vivid and tough character that director Josh Cooley loves.

“Even when we would blow up the movie and kind of rethink things, Bo Peep was always the foundation of the entire movie,” says Cooley, who was one of the writers and story supervisor on Pixar’s Inside Out. “She was always part of a baby’s lamp instead of being a toy so she probably always knew her life span in a kid’s room was going to be shorter, so, when things change, she’s more ready to accept it and move on to something else.”

Cooley believes that Woody really wasn’t ready for those kinds of changes and his mission had always been to be Andy’s protector. He adds, “In a way, it was a mission he never wanted to let go of because it was his whole identity as a toy. I kind of looked to my relationship with my wife when I thought of their relationship. We have completely different ways of looking at things and when you have that it can be very interesting. Watching two characters who agree on everything or see everything the same way isn’t as fun to watch.”

While revealing Bo Peep’s strength was a big raison d’etre for the latest Toy Story tale, Cooley also wanted to give Woody another look. The cowboy had always been a dutiful companion, but there had to be more.

“That was the thing we thought about most in early versions of the story,” says Cooley. “We didn’t take that into account as much. It just felt like a fun adventure but nothing deep enough, and it wasn’t until we locked into where Woody should go in Toy Story 4 that all of a sudden it felt like this was the movie, because it was getting down deeper into Woody’s psyche. Toy Story has always been about the fear of being replaced.”

If one of Pixar’s mottos has been to make characters that move in a way that’s true to their materials, then this new version of Bo Peep — an almost ninja-like character — was a conundrum. Bo Peep carves a life outside of a child’s room for herself and she does that as a porcelain doll. The entire design team would have to find a way to make it feel genuine. 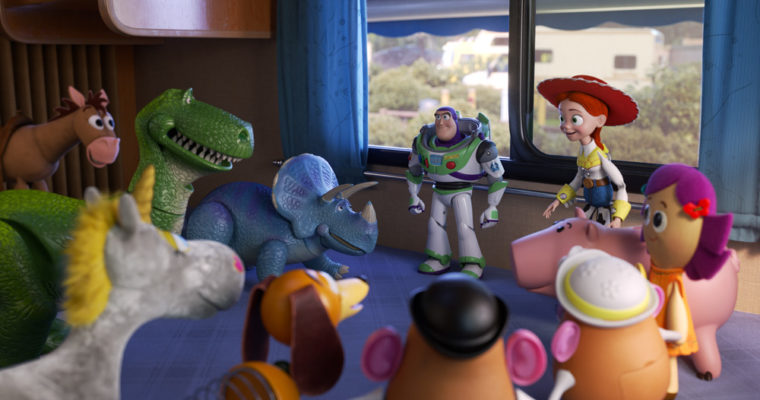 “We definitely played with how far to break her, how far to scratch her, and it’s really fun because she is an old toy,” says directing animator Patty Kihm, whose numerous Pixar credits go back to 1998’s A Bug’s Life and include Toy Story 2 and 3. “We were asking ourselves how far we could take it, and ultimately we went with the arm being broken because it felt like a very clear read of who she is — she is porcelain. She is basically living a very risky life by even being played with so openly by kids and not being on a shelf, just being admired by a collector who has a bunch of porcelain items. Andrew [Stanton] was always really good at reminding us that [the toys] can’t just be running out in public openly. So we also knew that we needed to give Bo a method to move around if this toy, unlike other toys, is out there living her life. So, we made her an automobile. She gets some trash together and makes this ‘skunkmobile’ that looks like it might be a real skunk to get around — because you’re going to get away from a skunk.”

Toy Story 4 went through several changes itself since it was developed around the time of then Pixar head John Lasseter’s departure. Rashida Jones and Will McCormick were the original writers on the fourth movie, but they left the project abruptly in 2017. According to CNN, Jones denied that the departure was due to an unwanted advance from Lasseter. But Jones did say she moved on from the film because Pixar has “a culture where women and people of color do not have an equal creative voice.” (The studio did not respond when asked to comment on this statement.)

In the movie, Bo Peep is once again voiced by actress Annie Potts. Tom Hanks and Tim Allen are also back in their signature roles. The film adds Keanu Reeves as Duke Caboom and Christina Hendricks as Gabby Gabby. In addition, the filmmakers worked with archival sounds to create a vocal performance for Don Rickles’ Mr. Potato Head, since he died during production.

“Keanu was our first choice for Duke Caboom, and he completely got it right away,” says Cooley of the Evel Knievel-like character. “We didn’t know he owned his own motorcycle when we brought him here. So, he understood how this character should move and talk.” 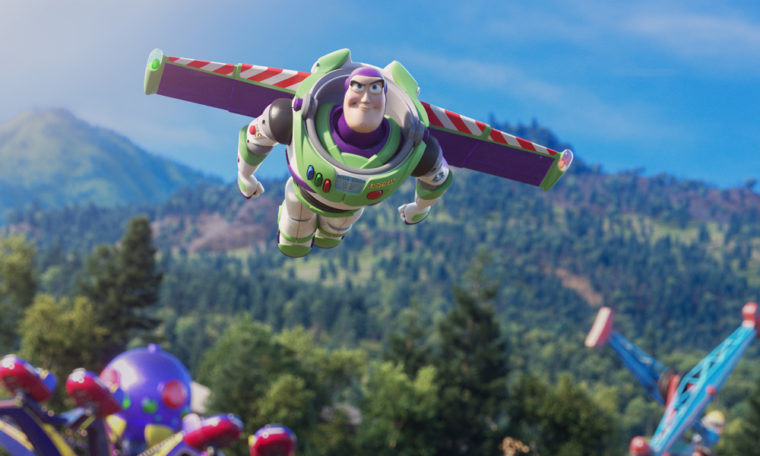 While the filmmakers took Bo Peep in a bold new direction, Toy Story 4 also reflects all the huge technological advancements made at Pixar since the first film was released in 1995. When the relatively small group of filmmakers on staff started on Toy Story, their only previous project was about five minutes long. The new movie takes the characters through a dusty antique mall and into the outdoor elements.

“We have some new effects tools which allowed us to take on the rain sequence in the opening of the movie,” says Bill Reeves, Pixar’s global technology supervisor. “And it also allowed us to add dust on the floors and the cabinets and the rafters in the mall, and to add cobwebs to all the nooks and crannies, creating a much richer environment. We also use some new tools to detail thousands of animated practical lights for the carnival scenes in the film. We also pushed the cinematography in the shots even further in Toy Story 4. We added dust particulate in the air which, taken together with extreme depth of field in some shots, lead to these visually pleasing bokeh effects.”

“I was thinking of this film in terms of, if you asked Woody what was the most important moment of his life, he would tell you that it was the time he met Bo for the second time,” says Cooley. “We wanted it to be that important and that big for him. And, of course, this film would not be what it is without the relationship between Woody and Buzz, and you do get to see their relationship develop and play a part in the story. If you don’t stick to the original idea about these movies, you run the risk of making a movie about tiny people instead of a movie about toys and what their lives are like and what motivates them in their world. This is still an adventure story, just like how Indiana Jones movies are adventure movies that have romance in them as well!”

Meet the New Toys
One of the main characters introduced in the new movie is Forky (voiced by Tony Hale), which is a toy that Bonnie made out of a disposable spork. “Forky is facing a crisis as he wants to fulfill his purpose as a spork, but now he has a toy purpose that has been thrust upon him,” explains director Josh Cooley. Adds producer Jonas Rivera, “He doesn’t understand the rules of the world, so he doesn’t play by the rules. That makes life hard for Woody, who’s just trying to help Forky understand the importance of his kid.” 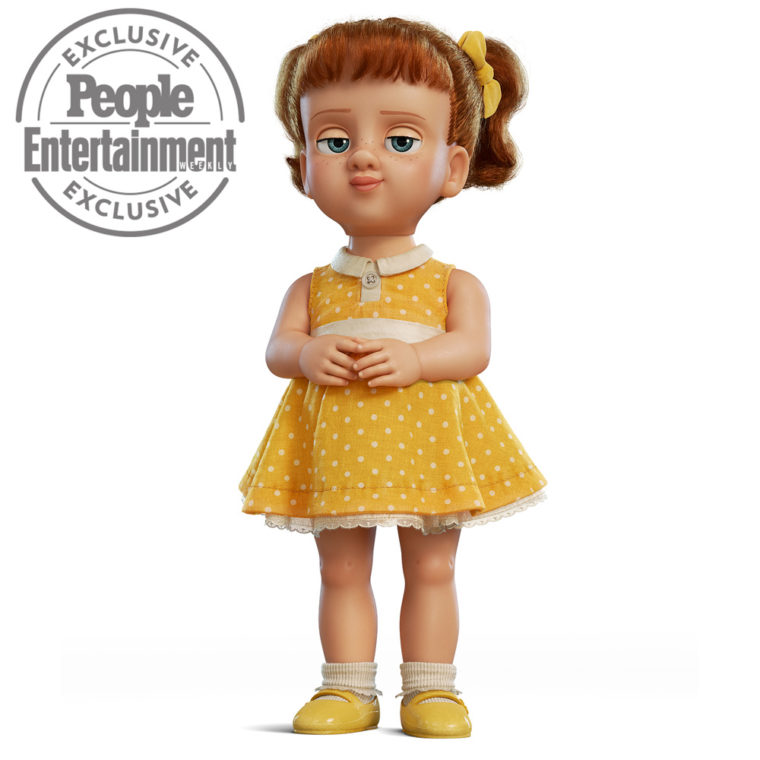 Gabby Gabby (voiced by Christina Hendricks) is a talking pull-string doll from the 1950s, but a manufacturing defect has left her sounding not quite right. She has spent over 60 years forgotten in a jam-packed antique store — her only companions are a group of voiceless ventriloquist dummies. Gabby Gabby knows someone will want her if only she can find a working voice box to repair hers. 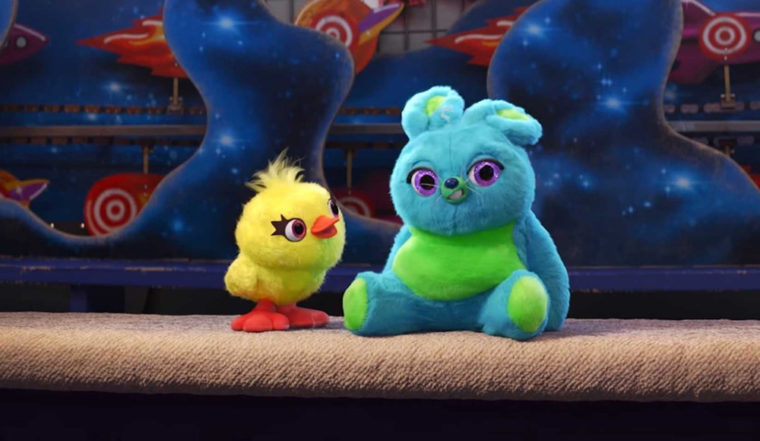 Ducky (Keegan-Michael Key) and Bunny (Jordan Peele) are carnival prizes who are eager to be won. But they find themselves on an unexpected adventure with a group of toys who have no idea what it feels like to be tacked to a prize wall. “Ducky and Bunny bring a new level of fun to the Toy Story universe,” says producer Mark Nielsen. “Their view of the world has been very singular, as they go from town to town in the same booth staring out at the world. They have no moral compass because they’ve watched kid after kid spend money on a game that’s unwinnable by design. Not only are they learning bad things about human nature, they’re trapped because of it.” 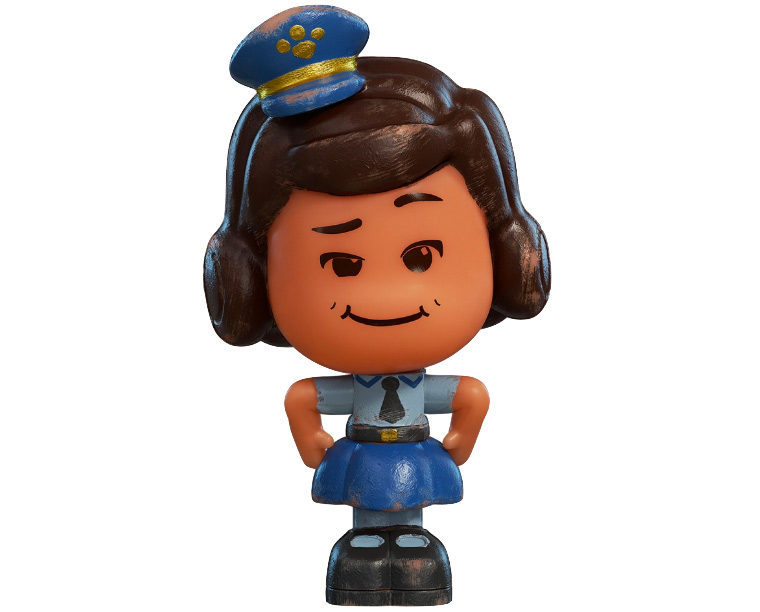 Giggle McDimples (Ally Maki) is a miniature plastic doll from the 1980s who is Bo Peep’s best friend. Small enough to perch on Bo’s shoulder, Giggle is Bo’s confidant, supporter and advisor. “Giggle is Bo’s Jiminy Cricket — we’re able to get insight on Bo through their relationship together,” says Cooley. “Giggle is definitely the smallest toy in the Toy Story universe. She’s been stepped on, vacuumed up, and probably put up a kid’s nose in her time.” 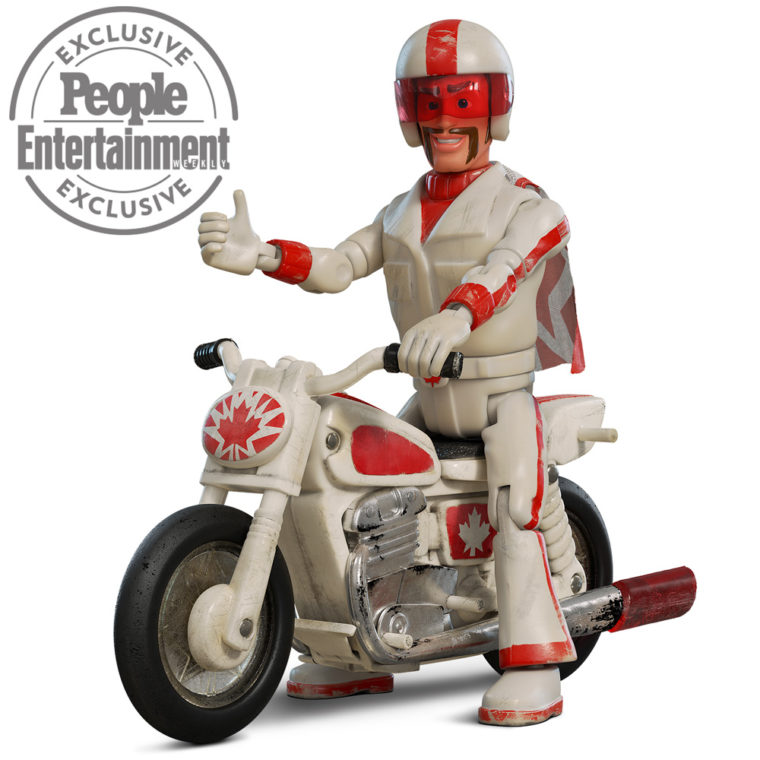 Duke Caboom (Keanu Reeves) is a 1970s action figure based on Canada’s greatest stuntman. Riding his powerful Caboom stunt-cycle, Duke is always prepared to show off his poses with confidence and swagger. Woody learns quickly that Duke has an Achilles heel: He has never been able to do the awesome stunts advertised in his own toy commercial. For years, Duke has been sitting in an antique store, constantly reliving the failures of his tragic past.

Benson is classic, antique ventriloquist dummy, and Gabby Gabby’s right hand. He leads a small group of ventriloquist dummies that serve as Gabby’s henchmen. With no person to give them a voice, these silent toys patrol the antique store with a looming quietness that is inherently unsettling. “The dummies are, by far, some of the creepiest characters we’ve ever created,” says producer Mark Nielsen. “Our animators really leaned into the truth in materials for how our ventriloquist dummies move. Dummies’ bodies are soft with no structure, so our dummies’ arms just dangle and their legs bend backwards. Throw in their fixed expressions with their wide eyes and big hinged jaws, and they’re nightmare material — in the best way possible.”