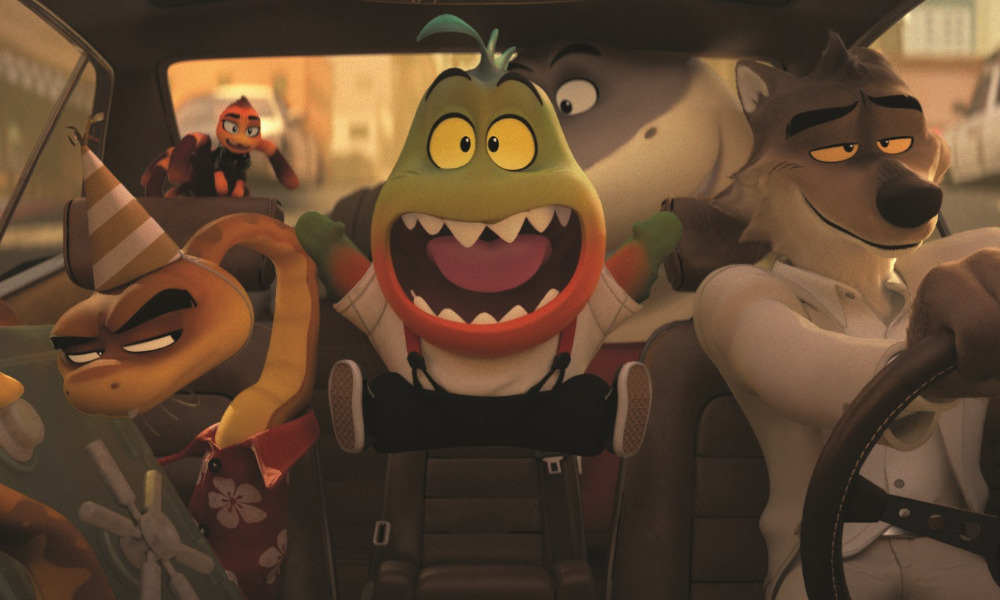 DreamWorks Animation’s latest big screen romp The Bad Guys looks to be making good, scoring mostly positive reviews ahead of its U.S. theatrical opening this Friday, April 22 (Universal Pictures). The painterly CGI flick has earned a 93% rating on Rotten Tomatoes (44 reviews), while MetaCritic’s smaller sampling of more mixed critical reactions (11) adds up to a MetaScore of 58 so far. Positive points go to the film’s stylized animation, humor and homages to classic heist movies.

Based on the books by Aaron Blabey and marking the feature directorial debut of Pierre Perifel (Bilby), The Bad Guys centers on five infamous friends: Dashing pickpocket Mr. Wolf (Sam Rockwell), seen-it-all safecracker Mr. Snake (Marc Maron), chill master-of-disguise Mr. Shark (Craig Robinson), short-fused “muscle” Mr. Piranha (Anthony Ramos) and sharp-tongued expert hacker Ms. Tarantula (Awkwafina), a.k.a. “Webs.” When the gang is caught, they agree to “go good” — or rather, pretend to. Under the tutelage of Professor Marmalade (Richard Ayoade), they learn how to act upright … but could true redemption be possible?

Heading into U.S. release, The Bad Guys is expected to score $15 million at the box-office this weekend, competing for family audiences with the Sonic the Hedgehog and Fantastic Beasts sequels in their third and second weekends. The movie, which has already been released in major territories outside the U.S. (it opened in the U.K. on April 1st), has made over $52,756,316 worldwide to date.

Read all about how DreamWorks created this artfully crafted action-comedy in Animation Magazine‘s May ’22 cover story on The Bad Guys here.

Here is a quick look at what critics are saying:

“There’s a lot to like about this movie, partly because it’s got decent female characters who kick butt in genuinely interesting and non-cliched ways … If we are being honest, The Bad Guys relies on some secondhand plot developments and double-crosses that you can see coming from the moon. That said, the five-year-old sitting next to me whooped with glee watching a horde of zombified guinea pigs swarm a bridge — and gave the whole movie a score of 10 stars out of five.”

“Though Blabey’s witty, sketchy illustration style has been given a sleeker makeover in its digitally animated transfer to the big screen, The Bad Guys nonetheless benefits from a spikier, more overtly cartoonish aesthetic than many of its more smoothly contoured DreamWorks brethren. Lively character design does as much work as the writing in warming us to a core crew of critters who — dashing silver-pelted ringleader Mr. Wolf aside — get somewhat short shrift in a busy, breakneck screenplay by Etan Cohen (returning to animation 14 years after Madagascar: Escape 2 Africa).”

“The animation — particularly during the plentiful action sequences, and especially during the car chases — is sharp and fast and wonderful to watch. As in the Ocean’s movies, there are some nifty edits that bring sophistication to the look of the film, despite some stumbles … Still, it’s clever, visually interesting and very, very funny. Even when the humor goes lowbrow, it makes narrative sense. A joke about flatulence is a lot funnier when it’s essential to the plot. The Bad Guys gets that.”

“In this age of super-smooth CGI animation, Perifel quaintly opts for a more Saturday-morning-TV aesthetic of a prime Hanna-Barbera vintage. That said, in its throwback, kinetic frenzy, this DreamWorks film does suffer from a lack of emotional momentum … At times, [it] feels like they’re having more fun in the ADR booth than we are watching it on screen. But there are gags aplenty (some of them are even funny), a surreal chase climax involving an unfinished motorway, a helicopter, a meteorite and a lethal tidal wave of hypnotized guinea pigs. Like the film’s premise suggests, nothing this fun-looking can be all bad.”