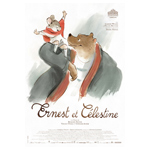 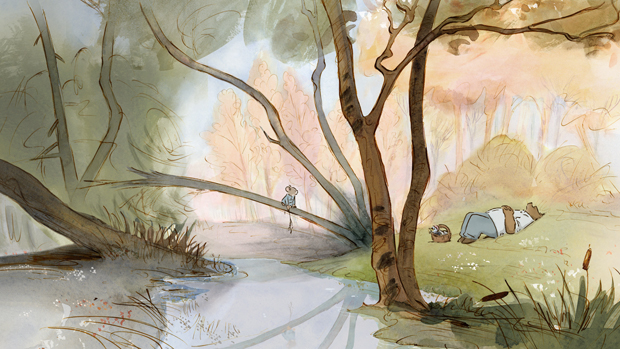 “In France, we don’t have the money to make Pixar movies: The artistic style becomes our strength, because it’s the only thing we have,” says Benjamin Renner, the director of the much-lauded hand-drawn import Ernest and Celestine.”We can’t do perfect shading and stuff like that, so we have to find other ways of telling a story.”

The charming Ernest and Celestine, which opens in the U.S. December 6 in a limited release that will expand through January, is already being hailed as an Oscar contender. It was Renner’s first feature, although his elegantly graphic student film La Queue de la Souris (A Mouse’s Tail) has attracted considerable attention online.

Renner was preparing to graduate from the Gobelins School of the Image in Paris when prolific producer Didier Brunner (The Secret of Kells, The Triplets of Belleville, the Kirikou trilogy) invited him to look over the project. Impressed by Belgian writer-illustrator Gabrielle Vincent’s original children’s books, Renner did some test animation and was promptly hired. After a year’s work, the director left the film, suggesting Renner as a replacement.

In Hollywood, everyone wants to be a director; Renner initially turned the job down. “The budget was €9 million, which is very big in France; that means a big crew of animators,” he explains. “I’d always worked alone, and I was scared it was too big for me. I said, ‘No, no, no way,’ and asked for two co-directors. He suggested Stéphane Aubier and Vincent Patar, that’s how we formed our trio. We all wanted the same thing for the film: We were working for Gabrielle Vincent, not for ourselves.”

Ernest and Celestine focuses on the warm but unlikely friendship that arises between Celestine, an artistic, strong-willed mouse, and Ernest, a lazy bear with a sweet tooth. Renner says the difference in size between his main characters helps the viewer understand them.

“When you have a strong contrast between two characters, the audience immediately sees the relationship between them,” he explains. “She’s a mouse and he’s a bear; she’s a little child; he’s older. When he threatens to eat her, you know he can–one gulp and it’s over. Celestine is very fragile but she has spirit, that’s why she stays alive.”

Renner feels that his initial refusal reassured the producer that he wasn’t a power-hungry artist who would insist on getting his own way. But he rejected plans calling for the animation to be done in several studios in different countries (as The Secret of Kells and other recent European films were):

“The producer told me we were going to make the animation here, here and here, and I said, ‘I quit. I just graduated from school—I don’t know how to make a film working in different studios. It’s an artistic film, if we mess that up the film will have no sense.’ So he found a way to produce all the animation and backgrounds in one studio in Paris.”
— Ernest and Celestine director Benjamin Renner

“The producer told me we were going to make the animation here, here and here, and I said, ‘I quit. I just graduated from school, I don’t know how to make a film working in different studios. It’s an artistic film, if we mess that up the film will have no sense.’ So he found a way to produce all the animation and backgrounds in one studio in Paris.”

The animators at the studio drew on electronic tablets, which facilitated communication. “We were all working on computers that enabled us to share files and correct things. It’s very easy to work this way,” Renner says. “I would take files of animation, correct them and send them back; ‘Here’s what the character’s nose is supposed to look like.’ Everyone was sharing.”

Proprietary software enabled the artists to preserve the delicate pen and watercolor look of Vincent’s original illustrations, a goal Renner insisted on. “I was not lucky enough to have these books as a child,” he recalls. “I discovered them when the producer asked me to work on the project. Unfortunately, the artist was dead, so I couldn’t talk to her. But we visited family and saw her work, which was very important because she had to be present in the film.”

In the original French version, Lambert Wilson and Pauline Brunner provide the voices of Ernest and Celestine; will be English dub xxxxxxxxxxxx info to come.

“I don’t really feel confident to supervise the English voices,” Renner concludes. “Of course, I want to hear them, but I’m not going to be there when they record. When I hear American or English movies, it always sounds perfect, because it’s not my native language. I don’t know when it’s natural or not. When I listen to Game of Thrones, I feel like they play perfectly naturally, when it’s really very theatrical.”

GKIDS will announce limited and wide release dates for Ernest and Celestine soon.

Charles Solomon is an animation historian, author and teacher whose most recent books include The Art of Frozen, The Art and Making of Peanuts Animation and The Art of Toy Story 3.