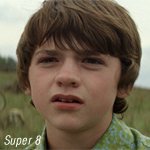 Super 8 posted decent numbers at the domestic box office this weekend — good enough for the top spot — while the foreign returns continued to give a boost to such animated fare as Kung Fu Panda 2.

The J.J. Abrams-directed film earned an estimated $37 million in its opening weekend, toppling X-Men: First Class. The Marvel mutant reboot took in $25 million its second weekend out for a total of about $98 million domestic. Third place went to The Hangover, Part II, with an $18.5 million weekend.

DreamWorks Animation’s Kung Fu Panda 2 landed in fourth place its third weekend out, taking in $16.6 million. The film has made $126 million domestic and an impressive $205 million overseas for a worldwide total of about $331 million. The 30 percent drop from last weekend’s take was surprisingly strong.

Panda 2‘s success overseas is becoming an increasing trend for a particular kind of film that includes animation and visual-effects-driven features. X-Men: First Class has earned $124 million overseas and this weekend’s No. 5 film, Disney’s Pirates of the Caribbean: On Stranger Tides, added $10 million domestic to reach the $204 million mark, while its overseas tally grew to a massive $678 million. The Hangover, Part II, meanwhile, has earned about the same overseas as it has at home ($214 million abroad) and Super 8 opened to a $6.7 million foreign total.

Also still in release were Marvel’s Thor, which had a $2.4 million weekend and has earned $173 million domestic and $258 million overseas for a $431 million total; and Fox/Blue Sky Studios’ Rio, which padded its domestic take to $137 million total to go with the $326 million earned abroad for a $464 million total.

The box office is likely to get another big boost this coming weekend when Warner Bros. rolls out the first of its new DC Entertainment superhero pics with the arrival in stereoscopic 3D of Green Lantern. Also coming next weekend is the Jim Carrey comedy Mr. Popper’s Penguins.