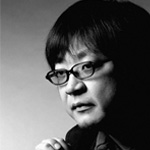 While toon town tab-keepers are pondering which of the slick, 3-D CG studio releases will land Oscar nomination spots, a very different kind of story is sailing to U.S. shores for its qualifying theatrical run—and perhaps a shot at the top Academy animation prize.

Released in its home country of Japan in 2009, Summer Wars is a strikingly rendered, tenderly crafted tale of an epic battle between our world and an invading virtual reality. The pastoral beauty of rural Japan butts up against imaginative sci-fi creatures and devices as a young computer whiz named Kenji, the girl of his dreams and her eccentric extended family duke it out against a malevolent cyber sentience known as Love Machine.

This imaginative take on a near miss with the cyber apocalypse come from much-lauded Japanese director Mamoru Hosoda, who stepped into the international spotlight with his multiple award-winning 2006 feature The Girl Who Leapt Through Time (Tokikake). 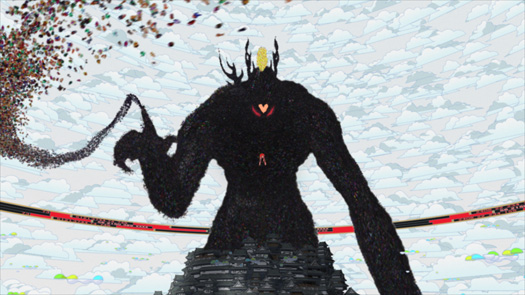 “I got inspiration from so many things,” the director tells us through a translator. “I was invited to many film festivals all over the world with my previous film Tokikake, and I encountered so many wonderful films and people there.” He adds that the experience of getting married and having to meet and get acquainted with new family members inspired the dynamics between Kenji and the strange but kindhearted Jinnouchi family he finds himself allied with.

To bring his latest physics-bending vision to life, he once again teamed up with Girl Who Leapt screenwriter Satoko Okudera. Other key Girl veterans included character designer Yoshiyuki Sadamato (whose talent was certainly pushed to the extreme by the large cast) and animation directors Hiroyuki Aoyama and Tatsuzo Nishida. Together, this crack team was able to deliver a jaw-dropping film laced with juxtaposed aesthetics (not to mention personalities) with an underlying theme of communication—be it modern “social” technology or the traditional interpersonal connections which it threatens. 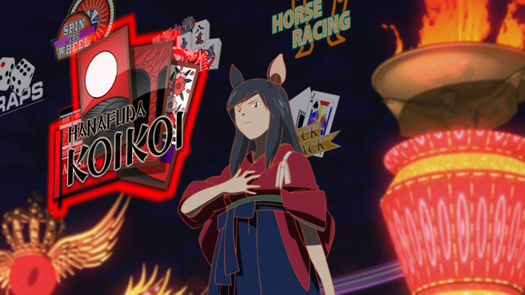 “As we needed hundreds and thousands of avatars, our CGI team created a program that automatically creates avatars by certain patterns of designs and colors,” Hosoda explains, referencing the arsenal of digital creatures of Love Machine’s virtual world, known as OZ, which seek to invade our hero’s reality.

The slick social network-turned-universe of OZ is eerie in its simplicity and populated by pop-art inspired characters and critters reminiscent of the work of Japanese artist Takeshi Murakami (with whom Hosoda collaborated on a short film in 2003). It stands in stark contrast to the lush landscapes and architecture of the picturesque city of Ueda where the Jinnouchis live.

“For the world of OZ, I was inspired by many social networks,” says Hosoda, naming popular American sites MySpace and Facebook as well as the highly exclusive and massively popular Japanese site mixi, which he has stated was the biggest influence. Launched in 2004, mixi is only accessible to users with a valid Japanese cell phone number yet currently boasts over 30 million users. The site is so pervasive and influential that psychologists in the country have identified a disorder known as “mixi Fatigue” in young people. 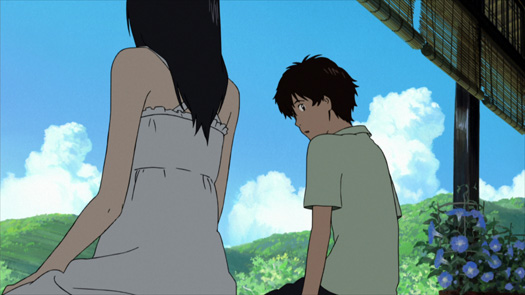 Luckily for animation fans, Hosoda and the Madhouse team were quite indefatigable during the somewhat drawn out production period—which Madhouse head Masao Maruyama attributed to the film’s multitude of “main characters” during a panel at Otakon ’09, before joking that Hosoda had been forced to promise his next film would have only two characters and take only two years to produce.

Hosoda, however, took the process in stride. “Drawing the storyboards was the most challenging [part of production],” he relates, “but it actually was the most enjoyable part as well!”

When asked about the recent surge in stereoscopic 3-D CG films swarming the animation scene, the somewhat traditionalist director is pragmatic: “There are so many ways to represent movies, and I think we should always take the best way for each individual film,” he opines, “However, as I majored in oil painting and have been working with animation drawn by hand, for me, 2D is the easiest way to create films—for now. At the same time, I think we still have so many possibilities in animation drawn by hand.” 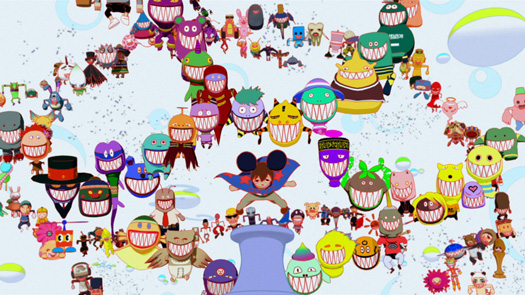 And while he won’t name his favorite scene in Summer Wars (“I cannot really take an objective view of it,” he demurs), he hopes audiences on both sides of the Pacific will be able to find a favorite moment to hold on to.

“I’m always trying to create a film that can make all people enjoy their lives and the world together by seeing it,” he says, “So I’ll be really happy if American audiences could also react in that way.”

Those lucky enough to have caught Summer Wars at one of its festival stops in the past year have certainly come away with enough wonder to spread plenty of positive buzz about this latest jewel from Japan. And they are probably chomping at the bit to find out what will be next from this imaginative anime auteur. “I’m working on my next film now! But, it’s still too early to say much about it,” Hosoda teases. Until more is revealed, audiences should be more than content with what Summer Wars’ dimension-mashing tale has to offer. 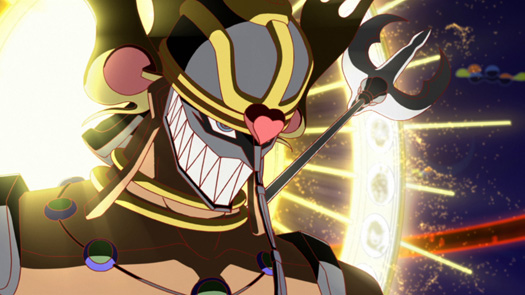 “There are so many ways to represent movies, and I think we should always take the best way for each individual film. However, as I majored in oil painting and have been working with animation drawn by hand, for me, 2D is the easiest way to create films—for now.”

You may also like...
Related Topics:Mamoru Hosoda, Summer Wars