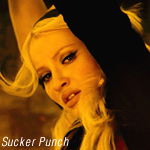 Zack Snyder is back and he’s hoping his new visual-effects action pic Sucker Punch can knock out a new installment in the popular  kid franchise Diary of a Wimpy Kid.

New Yorkers will have a chance this weekend to see the French animated feature Mia and the Migoo, which opens exclusively at the IFC Center. A national release is set for next month.

Also still in the mix is the animated feature Rango, which has performed well at the box office the past three weekends, as well as Mars Needs Moms and Gnomeo and Juliet.