Acclaimed Japanese toon house Studio Ghibli may have slowed down its feature production pace (its last full length film, When Marnie Was There, came out in 2014) — but that doesn’t mean the animators’ desks are gathering cobwebs. While we wait for its European co-production The Red Turtle to arrive in theaters, the Ghibli crew has released a brand new short based on very, very old material.

Ghibli is known for both original stories and imaginative adaptations of books like Howl’s Moving Castle, Kiki’s Delivery Service and Whisper of the Heart, but it’s history buffs rather than fiction addicts who might recognize the source material of the new short, which draws on the 12th and 13th century Choju Jinbutsu Giga. The “Scrolls of Frolicking Animals” are widely considered to be the earliest artistic ancestor of Japanese manga.

The animated adaptation, which reflects the original illustration design and coloring, was commissioned by energy company Marubeni Shin Denryoku in order to promote its strategic shift towards green energy production. The company’s Plan G initiative also donates a portion of bill payments to conservation efforts. The “Frolicking Animals” scrolls were chosen to reflect the natural beauty of pre-industrial Japan. Studio co-founder Hayao Miyazaki is well known for exploring humanity’s impact on the natural world in his films and addressing it often in interviews.

Thanks to Rocket News 24, who picked up the story from Japanese news site IT Media. 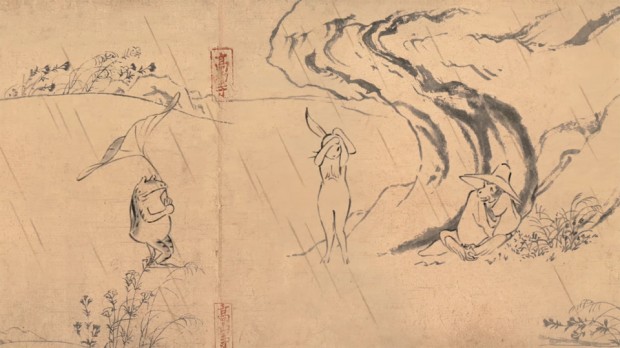