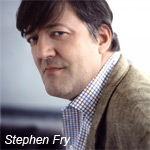 Director and producer Peter Jackson announced on his Facebook page Thursday that loquacious British actor, comedian, television host, writer and avid Tweeter Stephen Fry has been tagged to play the role of the Master of Laketown in the upcoming two-part feature adaption of J.R.R. Tokein’s fantasy tome, The Hobbit.

“I’ve known Stephen for several years, and we’re developing a ‘Dambusters’ movie together,” Jackson said, referencing an upcoming WWII action flick from his WingNut Films, “In addition to his writing skills, he’s a terrific actor and will create a very memorable Master for us.”

The Hobbit began shooting in New Zealand in March of this year, with filming being done in full stereo 3-D. Warner Bros. will be releasing the New Line/MGM/WingNut films theatrically in 2012 and 2013. Lord of the Rings veteran fx studio Weta Digital, of which Jackson is a co-founder, will be handling effects work for the films.