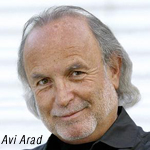 The film, about a robot boy and human boy who together fight an evil organization and rescue the boy’s kidnapped parents. The movie will mix live-action footage with CG-animated characters and is based on the popular Robosapien kid-size toy made by WowWee.

“How fortunate to find a winning project like this, with partners the caliber of Avi and Steven,” said David Steinberg, head of studio at Starz Animation Toronto. “This is the perfect fit for our studio, leveraging both the VFX strengths that we have built over the past year and the great character performance animation we are known for.”

The film will be offered to international buyers at the American Film Market, which runs Nov. 3-10 in Santa Monica, Calif.

You may also like...
Related Topics:Animate, Robosapien, Starz, Toronto