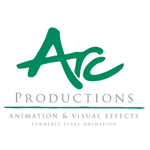 Starz Animation Toronto, recently sold by Starz to a Canadian investor group, has renamed itself Arc Productions and unveiled a new website and logo.

The new owners have embarked  on an aggressive growth phase for the company that plans to build on the well-earned reputation of Starz Animation Toronto as one of the world’s leading CG-animation and visual effects studios. Arc recently produced the animation for the 3D feature Gnomeo & Juliet for Disney’s Touchstone Pictures, and just announced the start of production on a stereoscopic CG animated feature with the working title OZ3D, a humorous and contemporary adaptation of the L. Frank Baum classic book, The Wonderful Wizard of Oz, in partnership with Multiple Media Entertainment and Gigapix Studios.

“At Arc Productions, we are storytellers.” says Steven Hecht, executive VP and spokesman for the company. “We thrive on bringing our many talents together as one, to craft stories that matter and characters that resonate, across the gamut of digital production platforms.”

The management team will expand Arc’s’ development slate to include independent productions and creation of intellectual property, as well as international co-productions.

In addition to its leading visual effects work on major international television productions such as Camelot (Starz, CBC), Arc will continue to provide animation and visual effects work for Robosapien: Rebooted, a live-action family feature from Arad Productions, and Dolphin Tale, a fall 2011 release from Alcon Entertainment and Warner Brothers, starring Morgan Freeman and Ashley Judd.

“Starz Animation Toronto has gained considerable notoriety of late, with the successful 3D debut of Gnomeo & Juliet, which has earned more than $170 million worldwide since its opening”, says Hecht. “Our vision is to continue to pursue partnerships, produce these major, award-winning animated features and leverage Arc’s reputation for CG animation and visual effects in a broader multimedia environment that will include features, television and high-end video game cinematics.”

The company’s new website can be seen at www.arcproductions.com.