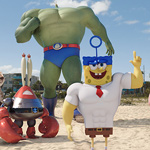 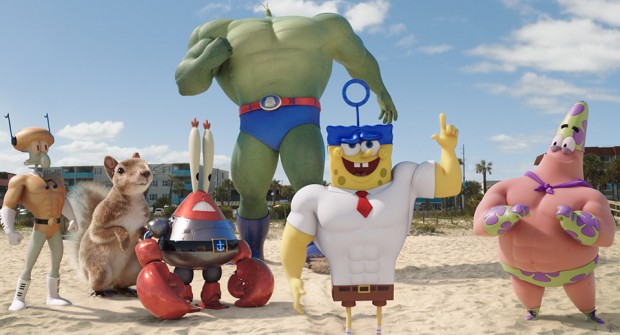 Sponge Out of Water

Sponge Out of Water

The long-lived Nick star enters the third dimension for his second movie outing, Sponge Out of Water.

SpongeBob SquarePants has been successfully living in a pineapple under the sea since 1999, entertaining millions of all ages via the hit Nickelodeon animated series and a 2004 big-screen outing. And with the TV show still in production, it took a bigger than usual story idea for the crew overseeing Bikini Bottom’s most famous resident to bring SpongeBob and his friends back to the big screen for The SpongeBob Movie: Sponge Out of Water, due Feb. 6 in theaters in stereoscopic 3D.

“We didn’t want to make a movie unless we had a story we thought was worthy of being made into a movie,” says Paul Tibbitt, the movie’s director and co-writer and executive producer of the TV series. “They (the studio) said we really want to make a movie, so we took a little time and we had a story that we were going to make into a TV episode but we liked it so much and we thought it had potential for a bigger arc so we made that into the movie.”

The result is a movie — the first released under the new Paramount Animation shingle — that takes SpongeBob, Patrick, Squidward, Sandy, Mr. Krabs and Plankton out of their natural 2D animated underwater habitat to real world and a hybrid of CG animation and live-action.

The tale begins when the top-secret recipe for Krabby Patties is stolen, bringing apocalyptic-style ruin to the undersea denizens of Bikini Bottom. That forces SpongeBob and his friends to team up with his foe, Plankton, and head to the surface to recover the recipe from the fiendish pirate Burger Beard, played in live-action by Antonio Banderas.

The TV voice cast reprises its roles for the film: Tom Kenny as SpongeBob, Bill Fagerbakke as Patrick, Rodger Bumpass as Squidward, Carolyn Lawrence as Sandy, Clancy Brown as Mr. Krabs and Mr. Lawrence as Plankton. Tibbitt and Mary Parent produced the movie, which is built on a story by Tibbitt and SpongeBob creator Stephen Hillenburg and a screenplay by Jonathan Aibel and Glenn Berger.

Coming Right At You

The most obvious new territories the movie tackles are CG animation and stereoscopic 3D, with the former handled by Australia-based Iloura and the latter by StereoD. Rough Draft Studios handled the 2D animation, as it does for the TV series.

Tibbitt says heading into the project there was a fair bit of trepidation over translating SpongeBob to CG animation — concerns Iloura easily and quickly laid to rest. “They were all fans of the show, so when they sent their first test over we could tell right away that they got it, they understood the acting in the show and the energy of it,” he says.

Creative director Vince Waller, also a veteran of the SpongeBob TV series, agrees. “They studied all of our shows and took note of how we moved the characters and the different expressions they make, and how they make them and literally the timing between our expressions and how they moved from one to the other,” he says.

Getting the look right for the CG versions of the character was less of an animation challenge than a model challenge, says Tibbitt.

“The big challenge was just these characters, as hand drawn characters, they’re cheats on cheats,” he says. “They’re quirky designs, so when we draw them we do a lot of cheats when we show them from different angles. So the main challenge was are you going to be able to turn these 3D models around? You might be able to make them look right from the front or a side view, but what happens to his cheek when he turns around? We had to figure out how to do those cheats in the computer.”

A Job for SpongeBob

With the script giving the characters a superhero makeover, those new versions of the iconic characters also had to be developed for CG animation. “We went through probably 50 or 60 designs for each of them, trying to figure out how they’re going to look; from long capes to short capes, whether SpongeBob had muscly legs or not,” says Waller. “We chose not. It just wasn’t him with human legs.”

Different characters got different styles, with Sandy most notably transforming her cartoony self into a realistic looking squirrel. “They did a few versions of her as a superhero and I think we just decided that because in the show whenever they did anything where she was her true self, it was just a photo of a squirrel, so it just made sense to stay true to that,” says Waller.

The CG characters had to be integrated into the live-action sequences, which were shot on location in Savannah, Ga., under the direction of Mike Mitchell. While those sequences were prevized with Halon, reality intruded in ways that animated shows rarely have to deal with.

“In animation, there’s so much more control over the environment,” says Tibbitt. “If you want to put the camera in a place that seems impossible, you just draw everything from that angle. … But you realize once you get there that we can’t really put the camera a quarter of an inch above the ground.”

For example, one sequence sees SpongeBob and friends spot a man sleeping on the beach and mistake him for a giant, hairy, beached porpoise. They attempt to roll him back into the water, using all their strength to partially roll him over before it becomes too much and he rolls back on top of the animated characters.

The live-action plate for that scene was shot with practical effects in camera, with a wire harness used to make the crewmember appear to move at the hands of the animated creatures to create a plate Iloura could animate to, Tibbitt says.

The first part of the movie is in traditional 2D animation and used the same models as the TV show with perhaps only the most minor of tweaks. “We might have gone in and redrawn them just to have a cleaner line for the higher-res version,” Waller says.

Some effects were added to the 2D shots, like caustic lighting effects and particles in the water — both beyond the budget of a TV series — to help give the feature a look of its own.

While the CG animation is getting a lot of attention, Waller says he’s most impressed by what was done in converting the 2D animation to stereo 3D. “You can feel the roundness of the eyes, all the characters — everyone has shape,” Waller says. “It blew my socks off.”

The longer schedule of the feature was relative luxury for those used to working under TV conditions, Waller says. “Oftentimes, we’ll get shows and we’ll work on them and we’ll try to punch them up and make them funnier, but you only have a very limited window to get the show out the door,” he says. “We definitely had more time to hone it and get it to where we wanted it to be.”

That also gave the filmmakers time to experiment in ways the TV show does not. For example, Screen Novelties animated one character that is essentially a rubber puppet via stop-motion. “We have one character as a stop-action character and then we also did some different styles for a couple of scenes just to make the movie feel big in scope compared to the TV show,” says Tibbitt.

With production on the movie completed, Tibbitt and Waller are both back at work on the SpongeBob SquarePants TV series at Nickelodeon, offering a few final thoughts on the experience:

“It’s much harder to tell a SpongeBob story over two hours than it is over 11 minutes,” says Tibbitt. “I think that was part of what made the transition from TV to movie easy for me was just that it was just like making a really long SpongeBob episode. We tried not to change our approach too much and I think we can just sort of go back to telling a few jokes and keeping it short and sweet.”