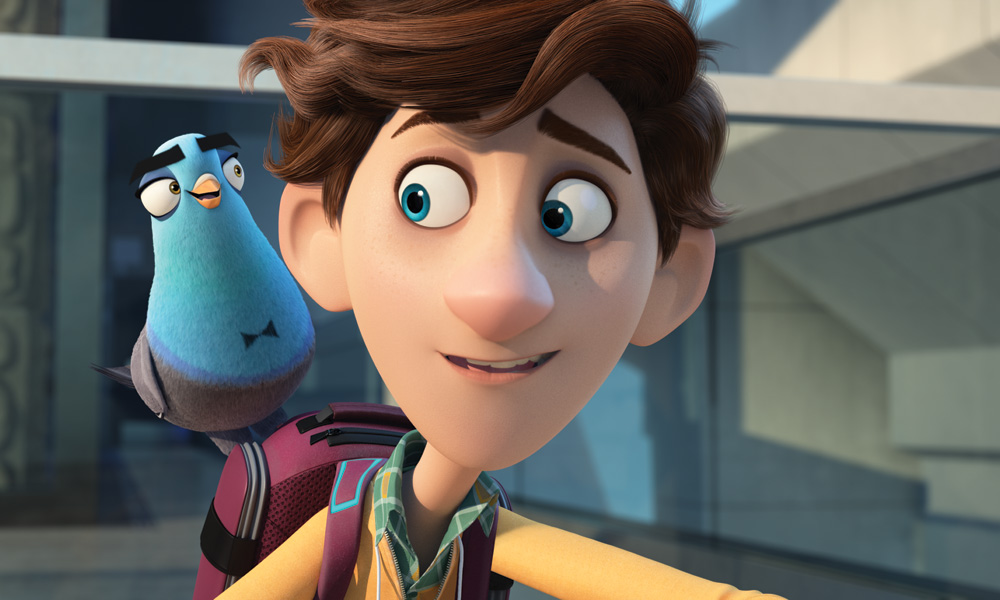 ***This article originally appeared in the January ‘20 issue of Animation Magazine (No. 296)***

There’s a surprising message in Spies in Disguise, the new Blue Sky Studios/20th Century Fox animated feature hitting theaters on Christmas Day from Walt Disney Pictures. It’s not simply that an epic, globetrotting, action-filled spy film can legitimately be done in animation. Nor is it that an action-adventure film can also successfully support a gonzo comedy angle. It isn’t even that, yes, audiences will accept a black Bond. Instead, the film’s message has to do with the state of the world we live in today, and how it could be made better.

Pretty heavy for a family film ostensibly about a man turning into a bird.

Played by, as opposed to voiced by, is the accurate term, too, according to the filmmakers. “We had a rough blueprint for the dialogue,” says Troy Quane, who directed the movie along with Nick Bruno, “but when we’d get into the room with Will and start to improv through the scenes, that would give us a lot of spontaneous actions and lines and jokes. We recorded some of that and brought it back to our animators, so you get not only the vocals but the physicality as well.” He adds that the animators also referenced some of Smith’s classic films, such as Independence Day.

Acting as cocky Lance Sterling’s foil in the story is a young, incalculably brilliant, idealistic engineer in the spy agency’s gadget lab named Walter Beckett, played by Tom Holland. Walter advocates for using such non-violent spy “weapons” as a device that envelops the enemy in a plastic hug, and a spontaneously-exploding image of a kitten in a snowstorm of glitter, whose “Awww!” factor disarms even the nastiest bad guy. The two are destined to remain apart until a concoction of Walter’s accidentally turns the superspy into a pigeon, which forces them to team up in order to prevent the cyborg villain Killian, a.k.a. Robo-Hand, from wiping out the entire U.S. espionage operation with deadly drones. Not only that, they must work surreptitiously, since Robo-Hand (so named for his high-tech mechanical claw) has framed Lance as a turncoat.

A New Take on the Buddy Pic

Much of Spies in Disguise is a high-voltage buddy film that belies the fact that Smith and Holland recorded their parts separately. “We never managed to get a session with them together,” says Bruno. “In the recording sessions we’d use the pages, but then seeing where we ended up we’d go back to the other guy and say, ‘Okay, we’ve got a new version of this.’ There was a lot more back-and-forth between them, but they were both really game and really patient.”

Australian actor Ben Mendelsohn voices Robo-Hand and in a refreshing twist for any spy film, the villain is actually given understandable motivation for wanting to destroy the other side. In fact, Bruno says that the film’s repeated release postponements ─ it was originally slated for January 2019 and bumped even before Disney’s acquisition of Fox ─ created more time to really fine-tune the character. The spy agency’s director Jenkins, a.k.a. Joyless, is played by Reba McEntire (cast very much against type), while Rashida Jones gives voice to Internal Affairs Agent Marcy Kappel, who embarks on a heavily-armed, Javert-like quest to bring in the supposed double agent, and Rachel Brosnahan plays the key role of young Walter’s mom.

Spies in Disguise is the first feature directorial gig for both animator Bruno and story artist Quane, who found their creative partnership easy to manage. “We didn’t divvy it up in the sense of, ‘You handle all these departments, and I’ll handle all those departments, and I’ll see you at the end of the movie,’” says Quane. “We really see things similarly.” Adds Bruno: “As everybody that we work with can tell you, there’s really only one brain we share.” 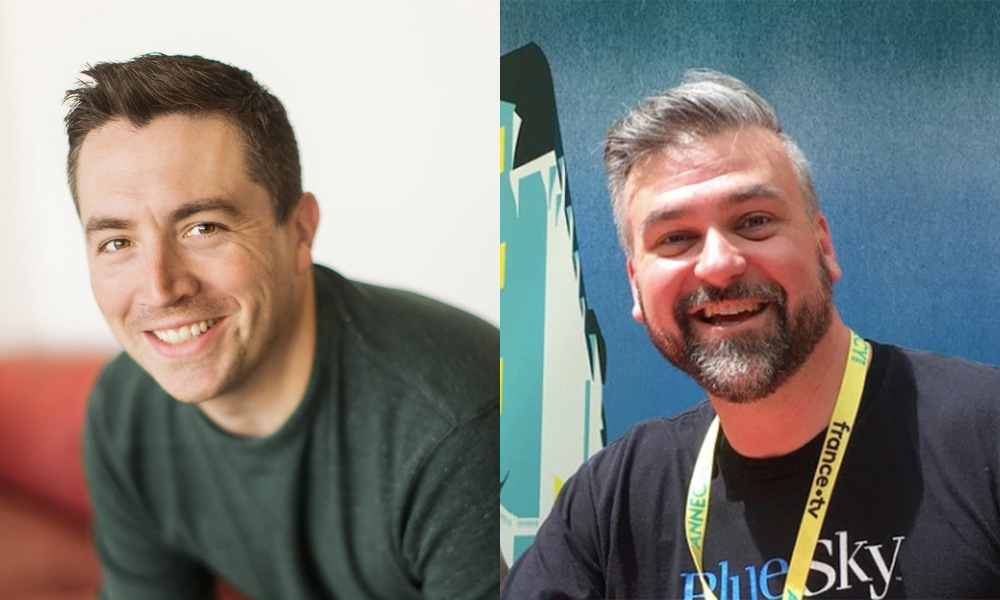 They also share a love of spy films, though their aim with this movie was not to spoof the originals, but rather have fun with their conventions. One such example was in designing Lance Sterling to resemble a martini glass with a wide torso over thin, stem-like legs (shaken, not bird). That proved to be a challenge for the animation team, according to supervising animator Jeff Gabor. “When you have legs that thin doing a lot of action they tend to get wiped away either with motion-blur or image strobes,” he says. “You have to be extra careful with your space and timing of animation to make sure those things read.”

Spies in Disguise offered myriad challenges for just about every department, starting with designing human Lance and pigeon Lance so that they were both recognizably Lance. “We spent a year trying to make sure the models were in reference to each other, particularly the eyes,” Gabor says. “At Blue Sky we’re pretty familiar with animating birds [through the Rio films] but we wanted to make sure than Lance felt more like a man in a bird suit, so you can actually feel Will Smith coming through the bird.”

Another tall order for the team was animating the sumo-sized henchman Kamora (voiced by Masi Oka) after he falls victim to a weapon of Walter’s that temporarily eradicates the skeleton, leaving a mass of living Jell-O. “That took a lot of coordination between the sim, effects, animation and design departments,” Gabor states. “You can’t just make him squishy and squashy since he has tattoos all over him. Everything has to move and relate to everything else and if you just push on one little area, you won’t get the feeling that it’s all one piece.”

A challenge of a different sort was creating bird Lance’s pigeon POV, depicting 360-degree vision in a visual environment that would give Salvador Dalí vertigo. “It was definitely tricky,” says production designer Michael Knapp. “We started looking at 360-degree video camera footage, but ultimately we could only do so much in Maya. We ended up doing a render within CGI Studio [Blue Sky’s rendering package]. We animated to camera and then the render group would show us what it looked like unwrapped and rendered in all 360 degrees outside of that camera. Since we were working in 2:35 aspect ratio, it had to unwrap in a way that fit the screen top to bottom, as well as side to side, and connect as Lance’s point of view shifts.”

Says Bruno, “We did some tests and finally found the look we were happy with, but then we put some characters into it and saw them explode all over the place. It was really a back-and-forth process with some friendly, patient, and forgiving animators.”

It also fell to Knapp to create the many exotic and evocative locales seen in the film, including such highly recognizable ones as the National Mall in D.C. and Venice’s Piazza San Marco. “The goal was always to try and capture the feeling for the place,” he says. “We would take liberties with what we needed to tell the story and so the action would unfold properly.”

A bigger challenge, though, was the completely fabricated setting of Robo-Hand’s lair, a ruined edifice on a remote Scottish island, because it had to accommodate so many different action scenes. “You’re constantly redressing the set for different action,” says Knapp. “You’ve got hundreds of drones, you’ve got soldiers and our main characters duking it out, and you’ve got glitter involved.” To enable the film’s many crowd scenes, an innovative enhanced crowd animation package was developed. “For this film we started a background generator system so we could make many, many more variations of characters without having to rig and materialize every single variation,” Gabor notes. “That’s definitely something we’re looking to expand further.”

Still, the heart of Spies in Disguise remains its message. Walter is convinced there is a better way to spy, and even live, than Lance’s violent fight-fire-with-fire approach. That is the main point of conflict between them, even overshadowing their obvious hipster-versus-dork polarization. Quane states that their philosophical confrontation scene was the toughest of the film. “Lance and Walter are on a boat and all they had to do was talk about their differences,” he says, “but every word means something and every line counts. It took forever to find the efficiency of that scene in a way that didn’t bore us to tears, but at the same time got their messages across on where they stand in their philosophies.”

The moral, the directors say, is that you can conquer every technical challenge of digital animation that can be thrown at you, but it still all comes down to the characters, their authenticity, and their emotions.

And glitter, if you’ve got it.