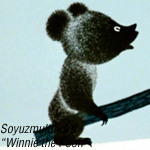 Founded 75 years ago, the studio has produced such classics as The Snow Queen, The Golden Antelope and a Russian version of Pinocchio called The Adventures of Buratino. It also produced its own version of Winnie the Pooh.

In an open letter to Putin, the studio’s animators said the studio needs up to $10 million over the next eight years to modernize and that the studio had lost its “financial, administrative and territorial independence” since the fall of the Soviet Union in 1991.

Putin responded that he will look into Soyuzmultfilm’s problems.

Variety reports that animation is popular in Russia, with animated features accounting for about 20 percent of Russia’s $1 billion box office last year.

The studio has been under government control since 1999.