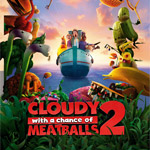 Sony is hoping that its new animated sequel, Cloudy 2 will have a chance of a $35 million weekend, although box office observers are expecting the colorful 3-D pic to cross the $40 million mark. Directed by Sony veterans, Kris Pearn and Cody Cameron, the movie opens four years after the first Cloudy with a Chance of Meatballs, which grossed over $245.8 million worldwide. The super hip voice cast includes Bill Hader, Anna Faris, Will Forte, Kristen Schaal, Andy Samberg, Benjamin Bratt, Neil Patrick Harris and James Caan! The sequel will also open in Central America, Chile and Vietnam this weekend.

The movie is currently scoring a solid 62% on Rottentomatoes.com. Here is what some of the top reviews had to say about it:

“It’s another brightly rendered effort, but, as the title indicates, a lot of the real creativity seems to have been used up the first time around.” – Tom Russo, Boston Globe

“Sometimes so strange, colorful and wildly cute that it may end up becoming a “Yellow Submarine” for a new generation.” – Miriam Bale, The New York Times

“Kids will chuckle, for sure. But parents who were pleasantly surprised by the original film’s intelligence will miss Lord and Miller’s guiding hands, as what once felt so funny now leaves a stale taste.” – Sean O’Connell, Washington Post

“The filmmakers see no imperative beyond the desire to entertain here. As weird as the world they’ve created can be, it’s ripe to the point of rupture in the imagination department. Where the previous film pushed technology to make everything look edible, this one has concentrated less on texture than design, inventing dozens of funky foodimals and a robust tropical environment for them to…What Erica Rivinoja, John Francis Daley and Jonathan Goldstein’s script lacks in lingering nutritional value, it compensates for with amusing food puns. If nothing else, the pic’s zany tone and manic pace are good for a quick-hit sugar high.” – Peter Debruge, Variety

“Swapping the disaster-flick motif of the original for a monster-movie overlay, they [directors] lend the proceedings a zippy visual energy and get fine support from their energetic voice cast. But they can’t gloss over the uninspired plotting, convoluted exposition (especially in the clunky setup that gets the characters off the island) and truly pun-ishing dialogue credited to Erica Rivinoja (South Park) and John Francis Daley amp; Jonathan Goldstein (Horrible Bosses). And although the 3D barely computes, few will likely notice -what with all those flocking Flamangos and wide-eyed strawberries providing ample distraction.” – Michael Rechtshaffen, The Hollywood Reporter

The film’s talented co-directors Kris Pearn and Cody Cameron will deliver the keynote at VIEW conference in Italy next month (Oct. 15-18). (www.viewconference.it)

You can read more about the making of the movie here: 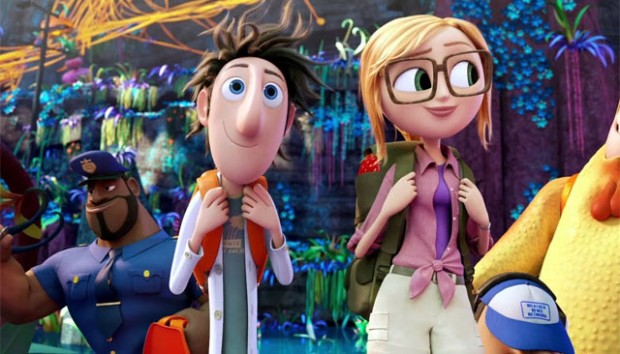