Now that the Battleship hype-fest has wound down, a new addition to the unfolding onslaught of Hasbro toy and game properties coming to the big screen is underway at Sony Pictures, who will be developing an animated flick based on Hasbro’s Tonka Trucks line.

“In its 65 years, Tonka has become more than a toy or a brand – Tonka trucks are a rite of passage for kids all around the world,” said Osher. “Time spent with these toys creates memories that last a lifetime as kids are inspired to play using the boundaries of their imagination. We look forward to creating a family friendly motion picture that brings the Tonka experience to life.” 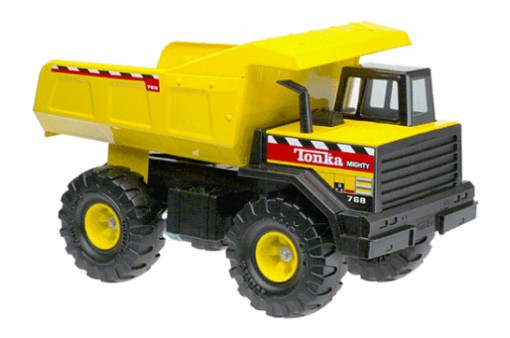 The Tonka project further cements the Hasbro/Sony relationship, with the studio having previously announced feature development plans for the toy giant’s Risk and Candy Land brands. (Candy Land being another co-pro with Happy Madison.) Following the success of the Transformers franchise, Hasbro is continuing to pursue film projects with various studios for Stretch Armstrong, Clue, Monopoly, Magic: The Gathering, Ouija and further G.I. Joe big-screen adventures.

No word on whether a magical Easy-Bake Oven coming-of-age tale or action-packed Boggle adventure (starring voice of King of the Hill Boggle champ Peggy Hill, Kathy Najimy, perhaps) are on tap.