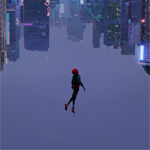 Sony Pictures Animation is drawing us into its web with the heart-pumping new teaser trailer for its all-animated feature Spider-Man: Into the Spider-Verse! Revealed by producers Christopher Miller and Phil Lord (who also penned the screenplay) at Brazilian con CCXP in São Paulo this weekend, the spot gives our first glimpse at the film’s Miles Morales (voiced by Shameik Moore) and a world of many Spideys…

Spider-Man: Into the Spider-Verse is due out December 14, 2018. The film is directed by Bob Persichetti (head of story, The Little Prince), Peter Ramsey (Rise of the Guardians) and Rodney Rothman (EP, Forgetting Sarah Marshall). Avi Arad, Amy Pascal and Christina Steinberg are producers alongside Lord and Miller.

Synopsis: Phil Lord and Christopher Miller, the creative minds behind The LEGO Movie and 21 Jump Street, bring their unique talents to a fresh vision of a different Spider-Man Universe, with a groundbreaking visual style that’s the first of its kind. Spider-Man: Into the Spider-Verse introduces Brooklyn teen Miles Morales, and the limitless possibilities of the Spider-Verse, where more than one can wear the mask.