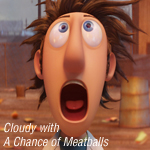 Sony Pictures Animation is ramping up its plans for a sequel to the 2009 hit Cloudy with a Chance of Meatballs, hiring Horrible Bosses screenwriters John Francis Daley and Jonathan Goldstein to work on the script, according to the Los Angeles Times.

The sequel will be based on an original idea and will have new directors as Phil Lord and Chris Miller, who directed the original, are not returning. The report says the studio is looking for someone who worked on developing the story for the first film in a lower-profile role to step up to the big chair.

Daley, who is best known as an actor whose roles included Sam on the cult TV series Freaks and Geeks, and Goldstein previously worked together writing an episode of the TV series Bones and have another script, Burt Wonderstone, in pre-production with Steve Carell starring.

Cloudy, which was released in stereoscopic 3D, featured the voices of Bill Hader and Anna Faris and grossed an estimated $243 million worldwide in ticket sales.