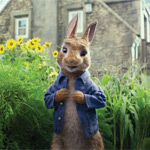 Sony Pictures has dated a sequel to its surprise hybrid box-office breakout Peter Rabbit, with the second CG/live-action adventure slated for February 7, 2020 in the US and March 27, 2020 in the UK, where it set a record as the studio’s biggest non-Bond success.

Sony rescheduled an untitled animated feature project produced by Phil Lord and Chris Miller (The LEGO Movie), moving it up to January 10, 2020 to make room for Peter Rabbit 2.