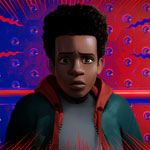 If your Spidey Senses have been tingling, it’s because Sony Pictures Animation launched the official trailer for the fully-animated, super fun looking feature Spider-Man: Into the Spider-Verse on Wednesday! The preview shows off the film’s very distinctive animation style, which fills the fairly normal city setting with splashes of brilliant flair inspired by the classic Marvel comic books.

“We are lucky to have such an amazing cast of funny, genuine creative souls to populate the Spider-verse. They have generous minds and great big hearts. And they have very talented throats. Which is where their delightful voices come from. We can’t wait for the world to see Miles Morales on the big screen. He’s such a fun and exciting new character, and telling his story through a revolutionary visual style makes for a totally fresh cinematic experience that, if we may say so, is freaking amazing.”

Directed by Bob Persichetti, Peter Ramsey and Rodney Rothman from a screenplay by Lord, Spider-Man: Into the Spider-Verse swings into theaters December 14, 2018.

‘If You Give a Mouse a Cookie’ Returns to Amazon with New Lisa Loeb Tunes
Animation’s A-List Heads to Annecy!