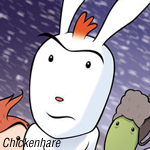 Chickenhare is the story of a unique animal that is half chicken, half hare and all hero. The  graphic novels in which Chickenhare was introduced, originally published in 2006 and 2008 by Dark Horse, follow him and his shelled sidekick, Abe, on their adventures in an amazing fantasy world filled with monstrous creatures, demonic critters and danger lurking around every corner.

Mike Richardson and Keith Goldberg will executive produce on behalf of Dark Horse Entertainment. Michael Lachance will oversee the project for Sony Pictures Animation with president of production Michelle Raimo-Kouyate.

“Sony Pictures Animation is always looking for original characters, and Chickenhare is a true original,” says  Raimo-Kouyate. “This story has everything we want in an animated film — broad comedy, heartfelt emotion, universal themes, and a one-of-a-kind hero that audiences will love.”

“Chris Grine’s Chickenhare is one of thequirkiest characters we’ve ever published,” said Richardson, president of Dark Horse. “We’re excited that the good people at Sony Pictures Animation responded so enthusiastically to what has to be one of our greatest comics-to-film projects yet. The more animated movies I see, the more I want to make them, and in Chickenhare we found a character so colorful and three-dimensional that he could only exist in an animated world.”