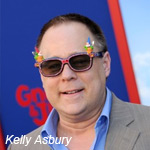 Gnomeo and Juliet and Shrek 2 director Kelly Asbury is going to have a very busy year. Not only is he writing Sony’s upcoming Pooch Café project, he is also in talks to direct Kazorn & The Unicorn, says Deadline.com. Produced by Sam Raimi, Josh Donen and Russell Hollander, Kazorn & The Unicorn tells the story of a young man who searches for a powerful weapon to prove his worth to his true love.

Asbury is also scheduled to direct Will Gallows and the Snake Bellied Troll, a live-action/CGI-animated feature for Elton John and David Furnish’s Rocket Pictures.