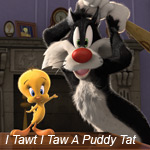 The world is a much different place today than it was in November of 1942 when Tweety Bird made his first appearance in A Tale of Two Kitties. Almost 69 years later, the feisty yellow canary is teaming up again with his life-long adversary, Sylvester the Cat in a new Warner Bros. theatrical short called I Tawt I Taw a Puddy Tat. The project is CG-animated and shown in stereoscopic 3-D before Warner Bros.’ feature Happy Feet Two, but the instant appeal and the charm of the characters are just the same as they were when Bob Clampett and Friz Freleng were in charge.

The new short is directed by animation veteran Matthew O’Callaghan, who also helmed the three CG Road Runner and Coyote shorts from 2010, as well as features such as Curious George, Open Season 2 and Mickey’s Twice Upon a Christmas.

“It all started when [Warner Bros. exec VP of creative affairs] Sam Register came to my office and shared a CD of novelty songs and stories recorded by Mel Blanc,” recalls O’Callaghan. “He thought it would be a neat idea to create some animation using these songs, blending modern technology with classic characters.”

O’Callaghan listened to the songs over and over again and went back and watched a lot of the classic Looney Tunes and Merrie Melodies shorts and came up with the idea for I Tawt I Taw a Puddy Tatt, which stars Sylvester, Tweety and Granny. (The other two upcoming Warner Bros. toons feature Daffy Duck and Wile E. Coyote and will be out in 2012.)

“I think the plot is reminiscent of many of the classic Looney Tunes shorts in that Sylvester tries to eat Tweety Bird, but has no success and it leads to lots of pain and misery for him,” says O’Callaghan. “However, the two characters had never sung together before, although Tweety has sung by himself many times. The challenge was that the song is a sweet duet and doesn’t have the classic Warner Bros. cartoon sensibility, where violent humor plays a big part. So I had to weave in the cat and bird chasing gags within the song without interrupting the lyrics and choreograph the action without interrupting or changing the music.”

The designs of the characters were faithful to Freleng’s original drawings and used in the ’50s. “Tweety Bird and Sylvester have changed dramatically through the years, but we really wanted to lock into that ‘50s look, much like the Coyote and Road Runner shorts we did last year,” says O’Callaghan. He also points out that they specifically decided to set the short in a New York apartment in order to take advantage of having the characters at a height and to explore all the potential of their physical interactions in 3-D.

Working with Dallas-based Reel FX, who also worked on the 2010 shorts with Warner Bros. Animation in Burbank, O’Callaghan and his team had to take the 2D artwork and physically dimensionalize them while avoiding the danger zone of photorealism. The CG animation had to offer the same elasticity and buoyancy seen in the animation of the ’50s era, but once the mechanics were put into place, life was easier for the director.

Of course, for O’Callaghan, one of the high points of the project was working with the classic Mel Blanc vocals, but it was also a big responsibility. “When they handed me those track, it suddenly seemed like a daunting task. It’s overwhelming to think about his legacy. I hope he’s looking down at us and smiling. It’s absolutely wonderful to say that I’m working with Mel Blanc, and in my heart, I feel that we have been able to do the best that we could with his song and dialogue.”

In addition to Blanc’s contributions, the producers were fortunate enough to have June Foray, who has been the voice of Granny since 1957, reprise her role again.

Sylvester the Cat has Tweety Bird in his clutches as Granny looks on in the new Looney Tunes 3D theatrical short I Tawt I Taw a Puddy Tat, debuting in theaters on November 18, in conjunction with Warner Bros. Pictures’ release of Happy Feet Two. (Photo Credit: © Warner Bros. Entertainment Inc. All Rights Reserved)

“I was young back then when I was doing her in those days, and now I’m old and still playing Granny,” says the 94-year-old legend, who has also voiced Rocky the Flying Squirrel, Jokey Smurf, Witch Hazel, and the cat Lucifer (Cinderella) during her amazing, multi-faceted career. “Friz Freleng hired me to do Granny back in the ’50s, and the other day, we saw the short with his two daughters and Chuck Jones’ family, and it was wonderful to be part of this rebirth of Warner Bros.’ theatrical shorts. A new generation of fans will now get to see Tweety and Sylvester and Granny in theaters again—and that’s great.”

O’Callaghan echoes the actress. “We’ve been working very hard to honor Mel Blanc’s legacy, and as challenging as it is, these characters put a smile on your face every day. We were also lucky to have the great art director Alan Bodner (Iron Giant, Kim Possible), who has worked on many Looney Tunes projects, on our team. I love the short platform, because they’re fun and exciting, and it gives us an opportunity to play with these amazing characters once again.”

Warner Bros.’ I Tawt I Taw a Puddy Tat will screen in theaters with Happy Feet Two, beginning November 18.

The Last of His Kind
The 2012 Features Race