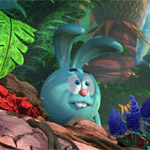 Here’s some good news for Kikoriki fans worldwide. A new trailer for the third feature starring the popular round characters is now available. The animated adventure comedy for the whole family is produced by Petersburg Animation Studio, directed by franchise veteran Denis Chernov, who also co-wrote the script with Dmitry Yakovenko.

The third theatrical feature for the franchise centers on Krash who decides to throw his best friend Barry an unforgettable birthday party and contacts the Deja Vu Agency to plan an exciting time travel adventure. However, a cataclysmic accident occurs after the Kikoriki crew fail to follow the rules, causing the whole group to get stuck in different time periods. Krashhas to find and retrieve his friends through the ages with the help of his alter ego from a different part of the time-space continuum!

Petersburg Animation Studio, one of the largest animation studios in Russia, carried out the entire digital production process using state-of-the-art technologies. The company used its own proprietary software SmAssetMan, for project management, project optimization and data protection, and also has unique software for creating settings and locations in virtual reality.The studio releases feature-length animated films as well as animated series, created using technologies from some of the leading studios worldwide.

“Riki Group is proud to announce that the production of 3D stereoscopic feature Kikoriki: Déjà Vu has been completed,” says Diana Yurinova, Riki Group’s VP of international business development and distribution. “The third installment of Kikoriki franchise has the most large-scale special effects and new vivid characters, which make the film interesting both for Kikoriki fans and new audience as well.”

The feature is based on the hugely popular Kikoriki characters and TV series (Smeshariki in Russia). The 209-episode series first premiered in Russia in 2004. The show began its run in the U.S. on The CW in 2008 as GoGoRiki.

World premiere screenings of Kikoriki: Déjà Vu were held at this year’s American Film Market in Santa Monica. The film is scheduled for theatrical release in April 2018.