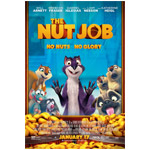 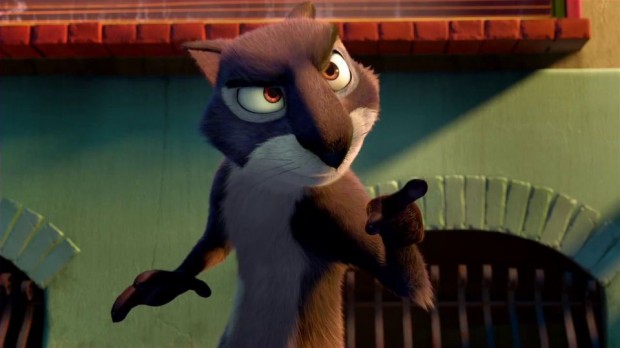 Toronto’s ToonBox and Korea’s Redrover tell the tale of a critter heist in the year’s first new CG-animated feature, The Nut Job.

There’s a whole story behind the family comedy The Nut Job, the first animated feature to come from Toronto-based ToonBox Entertainment. Ostensibly the film was made on the sort of truncated production schedule and budget one might expect from an indie studio dipping its toes in the feature pool. But in another sense, the film has been in the works for more than a decade.

Back in 2003, animator Peter Lepeniotis (Toy Story 2, Dinosaur) took a sabbatical in order to take a shot at directing something of his own. The result was the riotous, award-winning 2005 short Surly Squirrel, about a nasty park denizen who gets caught up in a bank heist. “There was a lot of talk about people turning it into a TV show or a film, but nothing came of it,” says Lepeniotis. “When I got my job here at ToonBox, working as a director for [the TV series] Bolts & Blip, the guys here wanted to turn Surly Squirrel into a feature. I went along with it, thinking it might fall apart later, but low and behold, they kept it alive.”

As co-writer and director of The Nut Job, Lepeniotis not only had to flesh out the original’s story and fineness the character development, he had to tone down some the action, notably a climactic gun battle. “In the feature film world, you have to be more restrained, and you have a lot of heads to answer to,” he notes, the latter point being a recurring theme expressed by many of The Nut Job‘s creators. Another fact of animated feature life these days is a big-name voice cast. Lepeniotis says he began production with the film’s purely visual sequences while the A-list cast, which includes Liam Neeson, Kathrine Heigl and Brendan Fraser, was being lined up with a little help from investing partner Gulfstream Pictures.

One thing that remained largely intact was the character of Surly Squirrel (voiced by Will Arnett), who assembles a ragtag team of cohorts in an attempt to knock over a nut store, without realizing that a band of human bank robbers are using the same store as a front. In short, Surly starts out as a selfish, furry schmuck–and gleefully so. At the risk of delivering a spoiler for anyone who’s never seen a movie, animated or otherwise, he eventually does undergo a redemption, though Lepeniotis strove not to make a meal of it.

“The spiritual aspect of this film that kept me going for three years was to make a character so hateable in the beginning, but then at the end go, ‘Wow, he’s saving everybody and I’m not questioning it.'” — Director Peter Lepeniotis

“The spiritual aspect of this film that kept me going for three years was to make a character so hateable in the beginning, but then at the end go, ‘Wow, he’s saving everybody and I’m not questioning it,'” he says. “But I didn’t want the audience to say, ‘Okay, here we go again,’ so if you look back through the tracking of the film, you cannot find specifically where the switch happens.”

Given both The Nut Job‘s tight schedule and the challenge of satisfying a small army of producers and investors spread out over North America and Korea, animation director Daryl Graham (9, Gnomeo & Juliet), who was aided by animation supervisors Morgan Ginsberg and Jesse Lickman, turned to a kind of hand-drawn shorthand. “We’ve taken more of a Chuck Jones way of doing things,” Graham says. “Chuck used to go through and do keyframes that were very clear, and the director would approve those, and then they would go off to the animator to use as a solid guide. Myself and a colleague, Shane Doyle, would do a bunch of drawn thumbnails, a lot of which went to Korea and some to the crew here. The animators would use those drawn thumbnails to follow the director’s vision while cutting down on revisions. I animated traditionally, 2D, on the film by helping people with their work.”

Korea’s Redrover Co. is a production partner on the film, though producer Graham Moloy estimates that about 85 percent of the picture was animated in-house at ToonBox. “We have a really good crew who have individually worked on feature films before this,” says Moloy, a Pixar veteran. “ToonBox brought them all together to work on this film.”

The film’s striking color palette, which is somewhere between vibrant and day-glo, was just one example of influence by the film’s backers. “One of the principal investors became very enamored of bright, glowing things,” says William Seneshen, head of production technology for The Nut Job. Lepeniotis and art director Ian Hastings worked out the color scheme with the producers, but it was up to Seneshen to keep the hues out of jail. “In some of the earlier sessions with Technicolor I showed one of the Korean producers what ‘illegal’ means, as far as getting into dangerous areas of overly saturated colors,” Seneshen says. “They learned how to hug those boundaries pretty effectively, I think. It’s certainly a unique look.”

Seneshen’s biggest worry came when Exotic Matter’s Naiad software package, used to create the film’s water scenes, was suddenly yanked off the market mid-production. “That scared us a lot,” Seneshen says. “We ended up coming to an agreement where they would rent it to us to allow us to get the film done.” All of the effects, including water and fire, are stylized, in keeping with the film’s overall look. “We didn’t strive for 100 percent photorealistic water,” he notes, “in fact, it would be jarring if it was.” For the record, Peregrine Lab’s Yeti was used for fur and feather simulation for the cast of city park denizens.

ToonBox is already at work on its next feature, a sci-fi comedy called Spark. Moloy says the combined companies behind the film are looking for as global a release as possible. “We are striving to get as much day-and-date as we can worldwide,” he states. “Because we have a smaller budget we don’t have to hit the high numbers that bigger projects do, but obviously the bigger the [opening] weekend you have is pretty influential on how it does. But I feel strongly about this film. I love this film.”

The Nut Job will be released by Open Road Films in theaters on January 17.