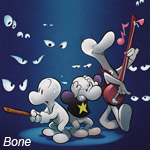 Few comics have made as much impact in the past 20 years — or been as difficult to get going in Hollywood — as Jeff Smith’s Bone.

But now the self-published success story is getting some serious attention from Warner Bros., which has tapped Patrick Sean Smith to write the adapted screenplay and P.J. Hogan to direct, according to The Hollywood Reporter. Animal Logic and Dan Lin of  Lin Pictures are producing the project.

The Reporter writes that Hogan likely will polish Smith’s draft and make the film Down Under. Animal Logic is the studio that animated Oscar-winner Happy Feet and Zack Snyder’s Legends of the Guardians: The Owls of Ga’Hoole.

A former animator, Smith self-published his comic book epic about three cartoony cousins and their adventures in a mysterious valley full of rat creatures, talking leaves and other dangers. The comic ran from 1991 to 2004 in black and white and was picked up in color by Scholastic, which has turned Bone into a huge hit in the children’s book market.

Warner Bros. picked up the rights to Bone in 2008. Nickelodeon took a previous stab at developing Bone.