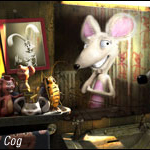 The duo, who directed the 2009 Oscar-nominated animated short film This Way Up, are currently prepping the feature, about a supermarket worker rat who disguises himself as a mouse to win fame and fortune as a singer.

Producing for Nexus are Charlotte Bavasso and Christopher O’Reilly.

The trade reports different animation techniques are being explored, including a hybrid of model-built backgrounds and CG-animated characters. Nexus also has two other animated features in development, Variety reports.