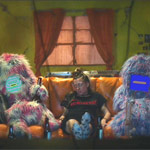 AMC Networks’ premium thriller, suspense and horror streaming service Shudder has snapped up rights to Kuso, the directorial debut of hip-hop artist Flying Lotus, for North America and UK/Ireland. The trippy hybrid feature generated plenty of buzz when it debuted at Sundance earlier this year, and now will be available on streaming and enjoy a New York and LA theatrical run starting July 21.

“Shudder felt like the perfect home for Kuso,” said Flying Lotus. “I’m excited for my fans, Shudder fans and just people who still have fun watching movies, to have the opportunity to see Kuso this summer.”

Kuso is produced by Eddie Alcazar, and boasts an original score and musical collaborations with Aphex Twin and Akira Yamaoka. The mind behind five stand-out albums and a range of audiovisual projects, Steve’s debut film has been favorably compared to the work of David Lynch and Matthew Barney.

“Kuso pushes the boundaries of filmmaking and we’re delighted to be working with Steve on this highly unique film, as Shudder continues it’s commitment to bringing new and innovative programming to its community,” said GM Linda Pan.