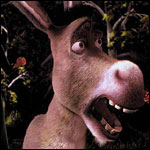 While many studios have adopted the strategy of releasing films domestically and overseas on the same day, DreamWork’s decision to delay Shrek 2‘s overseas bow has apparently paid off. According to Daily Variety, worldwide anticipation following the animated sequel’s record-shattering domestic bow has led to huge openings in foreign markets.

Shrek 2 scooped up an estimated $32 million in 16 markets, outperforming its predecessor and even trumping Disney/Pixar’s Finding Nemo in all but Brazil, where it did equally well. The film did its biggest business in Mexico and Australia, bringing in approximately $9.8 million in each locale over the course of five days.

To nip piracy concerns in the bud, the film opened day-and-date in five Southwest Asian Markets where it was suspected that counterfeit copies hurt the box-office performance of the original Shrek.

Domestically, Shrek 2 has already become the highest-grossing film of the year, surpassing $378 million in just five weeks. It has also topped Finding Nemo as the biggest animated moneymaker in history. Nemo wrapped up its domestic theatrical run with $339.7 million and went on to earn more than $864 million worldwide.