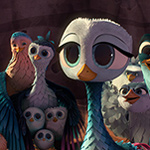 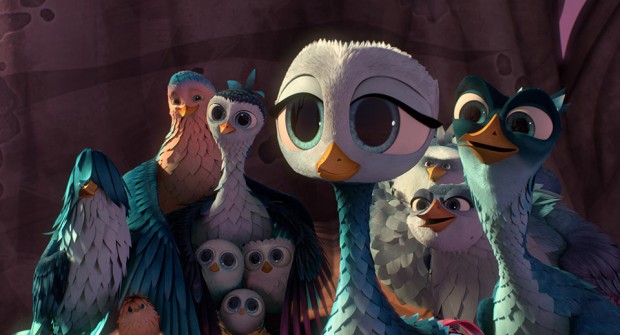 France’s TeamTO celebrates its 10th anniversary by releasing its first feature Yellowbird, which it animated completely in house.

Yellowbird is the tale of a young bird who has been separated from his kind since birth and unexpectedly has to step into a leadership role for a group of birds migrating to Africa.

The final stereoscopic 3D computer-animated film has a vibrant look produced entirely in France and a seemingly bright future in global markets that is an appropriate achievement for TeamTO as it celebrates its 10th anniversary in 2015.

“We hope we have success in the theaters, where it’s showing with enough promotion and with a fair number of theaters,” says Guillaume Hellouin, co-founder of TeamTO and executive producer on the movie. “Our second goal is we want to get he industry aware of our ability to make a feature film. We know that there’s an appetite in the market for films produced for $15 million. That’s a very modest budget, but we know that for this amount of money we can put something that looks great on screen.”

The film has had a limited theatrical release in the United States, to be followed by a more robust home video release. Meanwhile, it arrives Feb. 4 in theaters in France, and has already played in Russia where it played on about 1,000 screens. It also has been sold to Germany, where it will open in April, as well as to China, Korea and Canada.

TeamTO’s success in the feature realm builds on its success as a producer of animation for television. TeamTO got its start in May 2005, founded by Hellouin, Corinne Kouper and Caroline Souris. Hellouin had previously founded Sparx Animation in France in 1994 and spent a decade running it and producing such hits as Rollie Pollie Ollie before leaving to create a new company that could give key people more of a stake in its success.

Its first project for the Paris-based studio was working on the second season of the French animated series Zoé Kézako as well as some service work. In 2008, the company decided it wanted to locate the pipeline it had developed completely in France, and opened an animation studio in Bourg-les-Valences in the south of France to handle the work that previously been outsourced to other countries.

The Valences studio started with Angelo Rules, the first season of which aired in 2012 and has been a success sold to 150 countries, says Hellouin. Other successes include co-producing with Nelvana three seasons of Babar and the Adventures of Badou; a season of Oscar’s Oasis, for which a second season remains possible; and work-for-hire work with videogame giant Ubisoft on Rabbids Invasion, which is currently in its second season; and episodes of Pac-Man and the Ghostly Adventures and episodes of the Disney series Sofia the First.

Obviously, the next step was to make a feature film, leading eventually to Yellowbird, for which Hellouin says TeamTO sought to maintain the high bar it had set for itself in television production.

TeamTO co-founder Corrine Kouper says Yellowbird began with ideas that converged on her from two directions. One was from Antoine Barraud, who with Cory Edwards wrote the movie, who had an idea about a small bird that went the wrong way during its migration. The second came from a radio interview with famous French ornithologist Guilhem Lesaffre, who was discussing new research that showed how birds use visual cues from learning human constructs to following constellations to navigate as they migrated.

That began a long process of development, writing and financing that finally resulted into a production start about two years ago.

Helping to sell the movie was veteran agent Simon Crowe of SC Films. “He did a fantastic job selling the film worldwide so we could greenlight it,” Hellouin says.

The movie tells the tale of young Yellowbird (voiced by Seth Green) who is separated from his family at birth and raised by a Ladybug (Yvette Nicole Brown) with no bird role models to follow. Afraid to leave his home, a tentative outing sees him encounter the dying patriarch of a family of migratory birds and forced by circumstances out of his control to pretend he’s been chosen as the flock’s new leader on its trip to Africa. Other voice actors include Danny Glover, Jim Rash, Dakota Fanning, Elliot Gould and Christine Baranski.

Kouper says she and director Christian de Vita wanted a unique look for the movie. “We were very cautious not to go some routes that had already been achieved,” she says. “We wanted to create a stylized graphic look and avoid photorealism.”

“I think it looks better when it’s stylized that way and you’re not trying to achieve a realistic look,” says de Vita. “There’s nothing worse than to design a character and give him real pores and skin and hair. It adds a layer of realism that I think brings things a bit too close to reality when it’s better to just keep animation what it is.”

The look was designed by Benjamin Renner, who Kouper hired based on his short film A Mouse’s Tale, and gave carte blanche to come up with something different. “It was totally personal and I love that, so we thought that was the way to do it,” she says.

Production had its own set of challenges in addition to the typical budget and schedule issues any independent feature faces, starting with a rather obvious one. “To start, birds are notoriously difficult to animate, so that was a bit hard for everybody,” says de Vita.

The look Renner came up with also was a challenge to animate, as he had designed each feather like a hand-painted piece of paper that was then applied to the CG model, de Vita says. “The biggest and most complex aspect is when the characters are moving the feathers can cross and penetrate each other, so we had to develop a software or a tool to maintain the look without all this complex penetration happening.”

To handle the work, TeamTO rethought its pipeline, switching its rendering software to Renderman and using Nuke for compositing and building a large render farm. There also were tools created to tailor make skies and 3D clouds for the birds to fly through.

“We could achieve all this because we invested a lot in research and development to build a pipeline and to build the tools we are using to optimize the process, to minimize all the time-consuming work in order to let the artist focus on the creative part of their job,” says Hellouin.

The film was conceived and originally made with an English cast and later dubbed into a French-language version retitled Gus: Petit Oiseau, Grand Voyage.

The production had some 38 animators that worked on the project for seven or eight months, part of a total crew that Kouper says was between 250 and 300 people.

The results are speaking for themselves. “In terms of what we achieve in terms of the time we had, we are very proud of it,” says de Vita. “The first screenings with the crew, everyone was surprised and amazed at how well it turned out.”

As for TeamTO, it is already developing a second feature called The Artificials, which is planned as hybrid live-action and animation feature about androids with human brains, Hellouin says. Additional CG animated features are also in development, ensuring an interesting second decade for TeamTo and its crew.